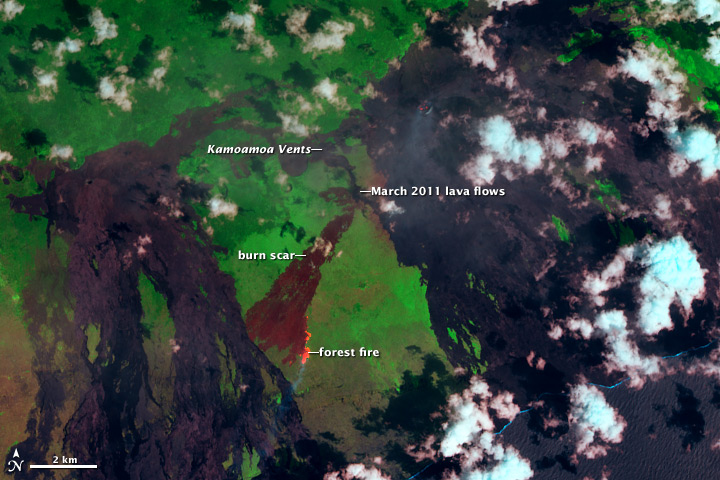 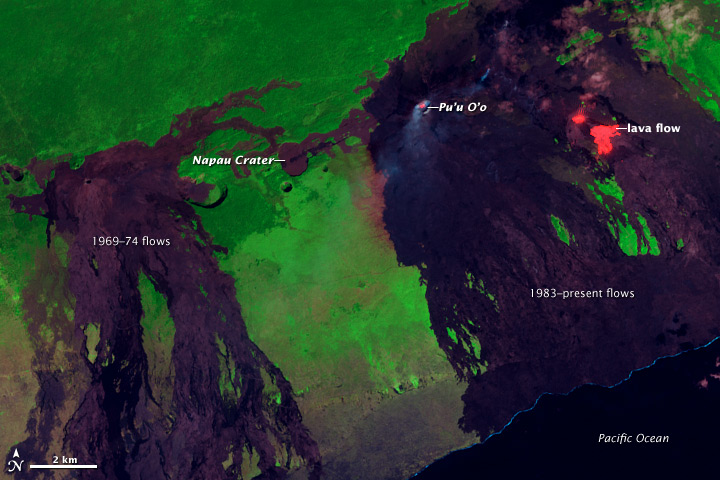 On March 5, 2011, one of the world’s most active volcanoes—Kilauea—surged with flows of fresh lava and the opening of a new fissure. The eruption touched off a forest fire that burned for much of the month and threatened one of Hawaii’s protected rainforests, according to news reports.

After many cloud-covered days, NASA’s Advanced Land Imager (ALI) on the Earth Observing-1 (EO-1) satellite captured a false-color image of the area (top) on March 18, 2011. A similar view from January 16, 2010, is provided for comparison.

In the image—which depicts mostly infrared wavelengths of light—vegetation is green, older lava flows are brown to black, and “hot” areas are red. In this case, the scorched land in the burn scar appears slightly red and brown, the still-burning forest fire appears bright red, and bare lava is black or very dark purple. In the 2010 image, bright red, active lava flows stand out within and near Pu’u ’O’o.

About 8 miles (13 kilometers) east of the volcano summit and along the rift zone between Napau Crater and Pu’u ’O’o, the Kamoamoa fissure spewed fresh lava as much as 50 meters (160 feet) into the air. Lava oozed several kilometers downhill and ceased flowing on March 9, according to the Hawaii Volcano Observatory. Just before the new fissures opened, magma withdrew beneath Pu’u ’O’o, and the inner crater collapsed 115 meters (377 feet).

As of March 22, the wildfire near Kilauea had grown to about 1,924 acres and there is “no estimated containment date,” according to Gary Wuchner of the National Park Service, in an interview with the Honolulu Star-Advertiser. The northern edge of the fire was closing in on a special ecological area within Hawaii Volcanoes National Park.

Kilauea is a shield volcano with a low angle and broad shape like the shields used by Hawaiian warriors of the past. They are usually built from the successive lava flows piling one on top of the other. The volcano’s current active period has been ongoing since 1983.

On March 5, 2011, one of Hawaii's most active volcanoes surged with flows of fresh lava and the opening of a new fissure.

30th Anniversary of the Pu’u ’O’o Eruption on Kilauea

Overlapping lava flows on Kilauea Volcano illustrate the formation of the Hawaiian Islands.