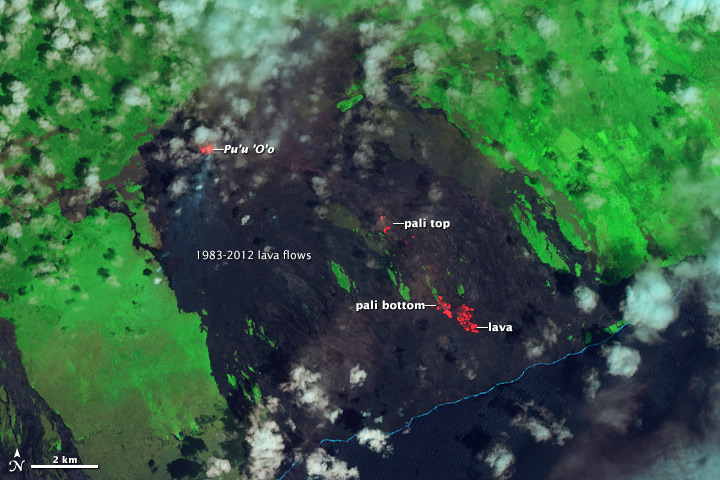 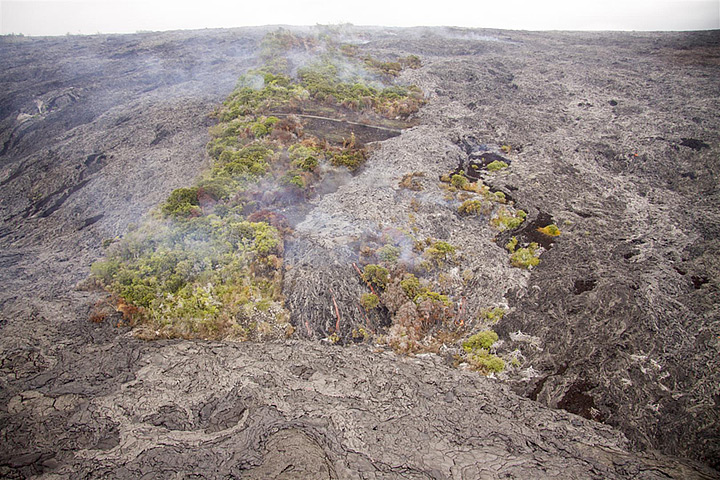 Instead of the red, green, and blue light in a conventional photograph, the false-color image at the top of the page contains information in two invisible wavelengths (shortwave infrared and near infrared), and one visible wavelength (green). Old lava flows absorb light in all three wavelengths, so they appear dark. Molten lava—and, to a lesser extent, freshly solidified lava—“glows” in shortwave infrared light, but absorbs near infrared and green light, so it appears red. Vegetation is bright green, clouds are white or cyan, and the ocean is dark blue. The image was acquired by the Advanced Land Imager (ALI) aboard the Earth Observing-1 (EO-1) satellite on October 13, 2012.

The 1983 eruption started at Pu’u ’O’o crater, which is the current site of upwelling lava. Despite being partially covered by clouds, Pu’u ’O’o is bright red in this image due to heat from the lava lake within. Lava flows from the crater towards the coast, hidden from view by insulated lava tubes. Some lava re-emerges from the tubes at the top of the pali—the steep slope that separates Kilauea’s eastern rift from the coastal plain.

The remainder of the lava continues through the tube network to the bottom of the pali, where it pools and eventually surfaces in broad lobes. According to the U.S. Geological Survey’s Hawai’ian Volcano Observatory, the lava is currently creeping across the coastal plain towards the ocean.

A photograph taken on October 4 (lower image) during a flight by USGS scientists shows the lava just as it reached the bottom of the pali. Most of the lava surface is dark in daylight. Only the hottest, most fluid lava glows orange or yellow. Gray volcanic plumes blowing from right to left trace the path of the lava flow down the pali.

Lava Flows on the Kilauea’s Pali

The volcano continues to earn its reputation as Earth’s most active.