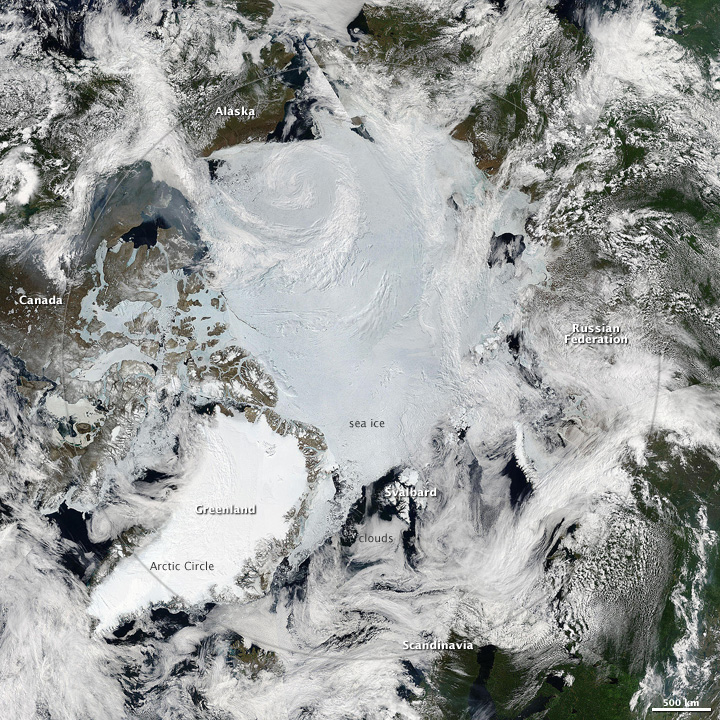 Clear skies in late June 2010 provided plenty of unfiltered sunlight to melt snow and ice in the Arctic. Arriving at roughly the same time as the Northern Hemisphere’s summer solstice, the conditions meant that unfiltered sunlight would reach the Arctic’s land and sea surfaces at a time of near round-the-clock daylight.

This Arctic mosaic is composed from several passes of the Moderate Resolution Imaging Spectroradiometer (MODIS) on NASA’s Aqua satellite on June 28, 2010. The brightest spot in the image is Greenland, covered in snowy white. West and north of Greenland, sea ice appears pale gray-blue. Clouds, some translucent and some opaque, occur throughout the scene, distinguished from sea ice by their lighter color, rougher texture, and less distinct margins. Clouds appear most prevalent north and west of Scandinavia, and between Alaska and the Russian Federation, but wide expanses of land and sea surface show through cloud-free areas. Most of the Arctic Circle (marked by a faint circle) is cloud-free.

Temperatures in May and June were high, leading to an early onset of melting in June over much of the Arctic. Melting of snow and ice affects Arctic albedo in two ways. First, melt reduces sea ice cover, replacing mostly light-reflecting sea ice with mostly light-absorbing seawater. Second, melt changes dry snow to wet snow. Although it still has a high albedo compared to seawater, wet snow is darker than dry snow and consequently can absorb three times the solar energy.

Distinct from the cloud cover, a dull gray smoke plume appears east of Alaska. The plume probably results from wildfires in Canada.

The high-resolution version of this image has a resolution of 2 kilometers.

The extent of Arctic sea ice peaked at 15.24 million square kilometers on March 18, 2012. It was the ninth consecutive year of maximum extents below the long-term average.