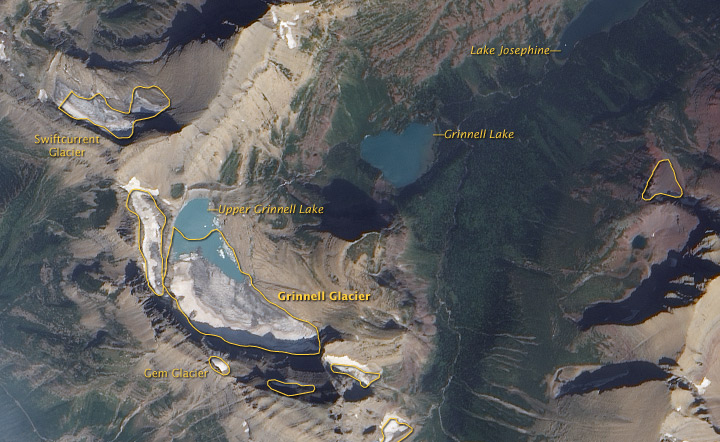 It’s been a hundred years since President Taft signed the legislation creating Glacier National Park in Montana. At the time, park sponsors wanted to protect the wild and scenic landscape from unregulated logging, mining, and railroad construction. Those planners probably didn’t imagine the dramatic changes that were in store in the following century: the retreat or disappearance of every glacier in the park due to warming climate.

This image of Grinnell Glacier, in the heart of the park, was captured by the Advanced Land Imager on NASA’s Earth Observing-1 (EO-1) satellite on August 21, 2003. Yellow outlines trace the extent of the Grinnell and nearby glaciers in 1950. (Glacier extents have been digitized from paper maps made by the U.S. Geological Survey as part of the GLIMS project.) Lower slopes of mountains are blanketed in forest, while above treeline, the ground appears to be bare rock. Small alpine plants may be present, but if so, they are too small or too widely scattered to detect.

Grinnell Glacier has retreated dramatically since 1950. Where glacier once rested, a lake now exists. Other small, unnamed glaciers have vanished altogether. In 2003, a study concluded that nearly two-thirds of the 150 glaciers that existed in Glacier National Park had melted completely as of 1980. All the remaining glaciers were rapidly retreating as average summertime temperatures in the area continued to rise faster than the global average. We won’t have to wait another century to witness the end of an era: scientists predict that all of the park’s remaining glaciers will have disappeared by 2020.

Shrinking since the early 1900s, the glaciers of Montana’s Glacier National Park are expected to continue declining over the next few decades until only insignificant lumps of ice remain.

Glacier National Park in Montana sits at the northern border of the United States.