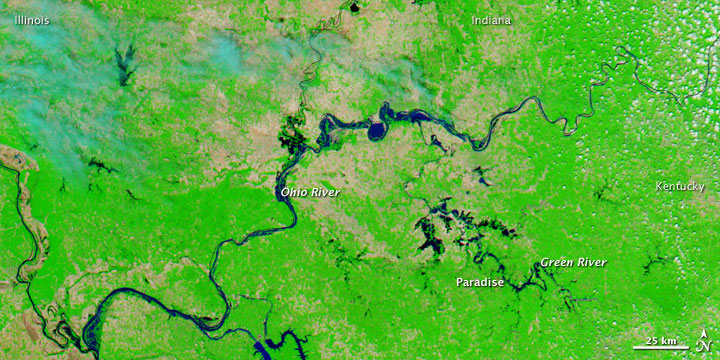 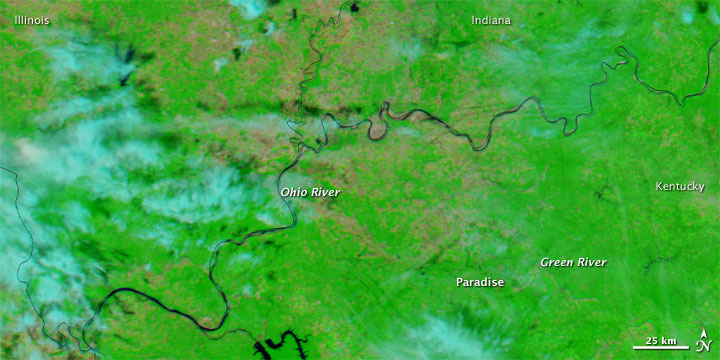 Severe floods struck Kentucky on May 1–2, 2010, causing statewide damage estimated at more than $30 million, according to the Lexington Herald-Leader. At 11:00 a.m. on May 9 (the day the top image was captured), the Green River was more than 7 feet above “major flood” stage, which is 390 feet, according to the National Weather Service. As of May 13, it was running 392.05 feet—still 2 feet above "major flood" stage.

The Moderate Resolution Imaging Spectroradiometer (MODIS) on NASA’s Aqua satellite captured these images of the region of Paradise, Kentucky, including parts of Illinois and Indiana. The top image shows the area on May 9. The bottom image shows the same area on April 29, before the floods struck. Both images use a combination of infrared and visible light to increase the contrast between water and land. Vegetation is bright green. Clouds are bright turquoise. Water is navy blue. Bare ground is pinkish-tan.

At the end of April, the Green River is barely discernible, but in early May, the river is conspicuous, as are some of its tributaries. To the north, the Ohio River was substantially more swollen in early May than it was in April.

Acquired on May 9, 2010 and April 29, 2010, these false-color images show changes in the Green and Ohio Rivers caused by severe flooding.

Flooding in Montana and North Dakota

Acquired June 5, 2011, and June 16, 2010, these false-color images compare conditions along the Milk, Souris, and Missouri Rivers in Montana and North Dakota.

Acquired August 7, 2011, and July 7, 2011, these false-color images compare conditions along the Souris River, which flooded in the summer of 2011.

Flooding along the Missouri River

Acquired June 6, 2011, and June 16, 2010, these false-color images compared conditions along the Missouri River in Nebraska, Iowa, and Missouri.