Irrigation Project along the Orange River 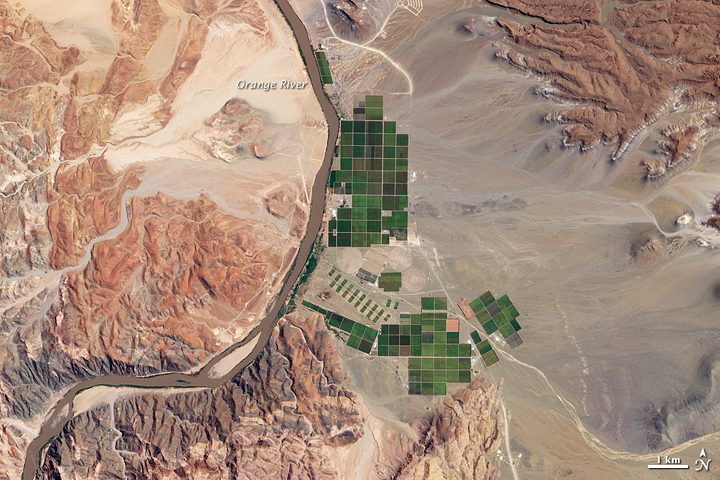 The Orange River serves as part of the border between Namibia and the Republic of South Africa. Along the banks of this river, roughly 100 kilometers (60 miles) inland from where the river empties into the Atlantic Ocean, irrigation projects take advantage of water from the river and soils from the floodplains to grow produce, turning parts of a normally earth-toned landscape emerald green.

Namibia is Africa’s most arid country south of the Sahara Desert, according to the United Nations Environment Programme (UNEP). Even though South Africa has a generally temperate climate, 65 percent of the land is too arid to support agriculture. Irrigation projects support agriculture that rainfall alone could not sustain. This irrigation project occurs along a section of the Orange River where the waterway turns north on its general westward path to the sea, and the area isn’t far from the eastern margin of the Namib Desert. Grapes are the primary agricultural product of this area. Thanks to local climatic conditions, grapes from Namibia are often ready for market two to three weeks before those of the main grape-producing regions of South Africa’s Cape.

Just days before ALI acquired this image, the area experienced flooding. Flooding along this section of the Orange River was relatively mild, and floodwaters had receded by the time ALI observed the area.

Acquired February 17, 2010, this true-color image shows emerald-green irrigated fields along the Orange River, which separates Namibia from the Republic of South Africa.

Date Orchards along the Orange River

Few plants can survive in this barren Northern Cape landscape—unless they happen to have a direct line to the Orange River.