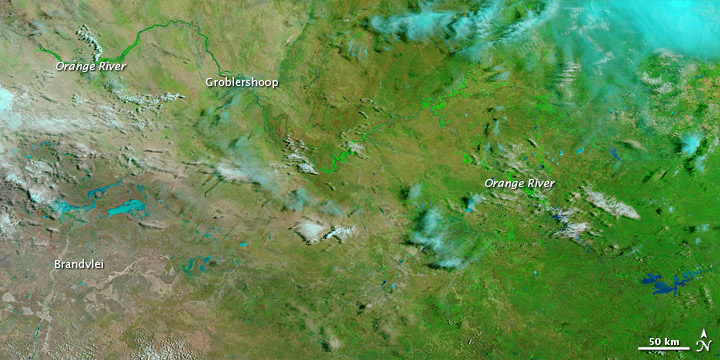 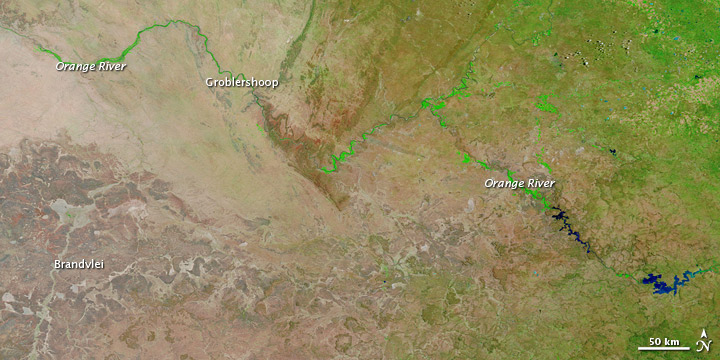 Heavy rains fell across southern Africa in early 2011. By early February, river flooding in South Africa alone had killed 91 people and caused over $100 million in damage, the United Nations stated. Times Live reported that the government had issued flood warnings for areas along the Orange, South Africa’s longest river.

The Moderate Resolution Imaging Spectroradiometer (MODIS) on NASA’s Terra satellite captured these false-color images of South Africa on February 13, 2011 (top), and February 19, 2010 (bottom). Both images use a combination of visible and infrared light to increase the contrast between water and land. Water ranges from blue to navy. Vegetation is green. Bare ground varies in color from pink-tan to brown. Clouds are pale blue-green or off-white, and often cast shadows onto the land surface below.

Compared to 2010, a general green-up is apparent in 2011. In 2010, the Orange River is easily spotted, thanks to the bright green riverbanks lined with irrigated crops and the relatively brown land nearby. In 2011, clouds partially obscure the river, which is less conspicuous because so much of the region has turned green. North of Brandvlei in 2011, standing water sprawls over large areas that had been dry a year before.

Groblershoop was among the many communities along the Orange River that had suffered from flooding in early 2011. Times Live reported that orchards around the town had been overwhelmed by flood waters, and farmers in the area were bracing for heavy losses. The UN Food and Agriculture Organization (FAO) warned that southern Africa could face food insecurity as a result of the floods. Further, the FAO warned that, with the seasonal rainy season only halfway over, South Africa might face its worst floods in decades.

Acquired February 12, 2010, and February 9, 2011, these false-color images show Namibia’s easternmost province of Caprivi before and after floods along the Zambezi River.