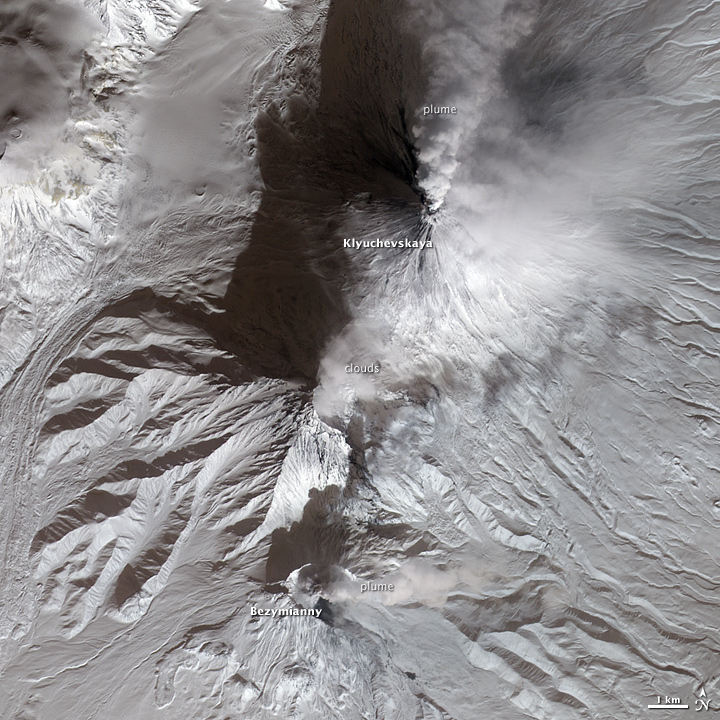 Neighboring volcanoes on Russia’s Kamchatka Peninsula acted up at the same time in mid-February 2010. Klyuchevskaya Volcano in the north and Bezymianny Volcano in the south both sent plumes skyward over a snowy landscape. The Advanced Spaceborne Thermal Emission and Reflection Radiometer (ASTER) on NASA’s Terra satellite captured this false-color image on February 13, 2010.

Low-angled sunlight illuminates the southern slopes of Kamchatka’s rugged landscape, as well as the southern sides of both volcanic plumes. The plumes’ light color suggests that, of the visible material in each plume, steam predominates over volcanic ash. Both plumes cast shadows toward the northwest.

Reaching a height of 4,835 meters (15,860 feet), Klyuchevskaya (also Kliuchevskoi) Volcano is both the tallest and most active volcano on Kamchatka. It is a stratovolcano—a steep-sloped, conical structure composed of alternating layers of solidified ash, hardened lava, and rock fragments ejected by earlier eruptions. On February 11, 2010, the Kamchatka Volcanic Eruption Response Team (KVERT) reported above-background seismic activity at Klyuchevskaya Volcano, including gas and/or steam plumes reaching 6 kilometers (20,000 feet) above sea level, lava flows, and Strombolian eruptions—intermittent explosions or fountains of rock—roughly 300 meters (1,000 feet) above the volcano’s summit.

Dwarfed by its neighbor, Bezymianny reaches 2,882 meters (9,455 feet) above sea level. Compared to the volcano immediately to the north, it releases a smaller, thinner plume. Like Klyuchevskaya, Bezymianny is also a stratovolcano. On February 11, KVERT reported that Bezymianny was releasing plumes that could affect low-flying aircraft, and it might have experienced a moderate explosive event February 5–6, 2010. More significant seismic activity at Klyuchevskaya, however, obscured data from Bezymianny.

Kamchatka lies along the Pacific Ring of Fire—a seismically active area encircling the Pacific Ocean. Both Klyuchevskaya and Bezymianny were intermittently active in late 2009 and early 2010.

Lava and Snow on Klyuchevskaya Volcano

A plume towered above the summit of Klyuchevskaya volcano on Russia’s Kamchatka Peninsula on February 13, 2010.

Plumes from Shiveluch and Klyuchevskaya