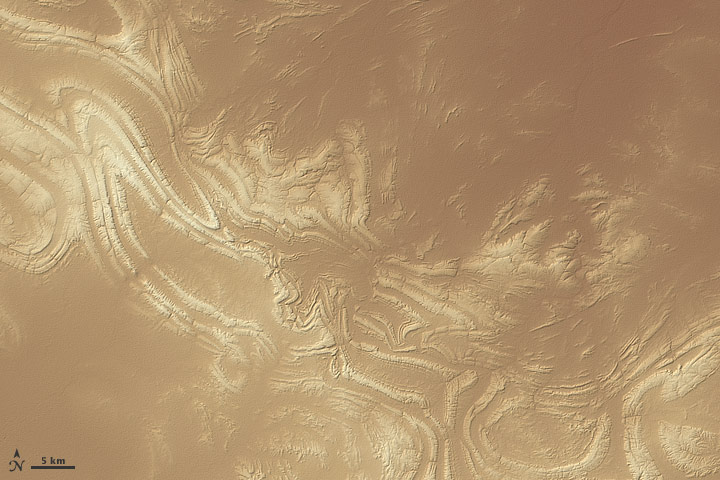 On February 11, 2000, NASA’s Space Shuttle Endeavour embarked on an 11-day mission to create the first near-global, high-resolution topographic map of Earth. A decade later, the data collected during the Shuttle Radar Topography Mission (SRTM) is still widely used by scientists, engineers, and mapmakers.

The Davenport Ranges of central Australia, known for their striking oval and zigzag patterns, are just one of many dramatic landscapes mapped during the mission. The dome of sinuous mesas and narrow valleys rises from the surrounding plain like an island surrounded by the sea. The higher-elevation features (pale yellow) are formed from harder rocks, such as quartz, while valleys are formed from softer rocks, such as shale, which erode more easily.

Until fairly recently, geologists thought that so little erosion had occurred in Australia’s interior that it was possible that the landforms of the Davenport Ranges had existed at the surface for more than 500 million years. However, new evidence indicates that while the tectonic event that bent and folded the underlying rocks took place hundreds of millions of years ago, the exposed ridges and valleys were exhumed by erosion as recently as 100 million years ago.

The Davenport Ranges of central Australia, known for their striking oval and zigzag patterns, are one of many dramatic landscapes mapped during the 2000 Shuttle Radar Topography Mission.