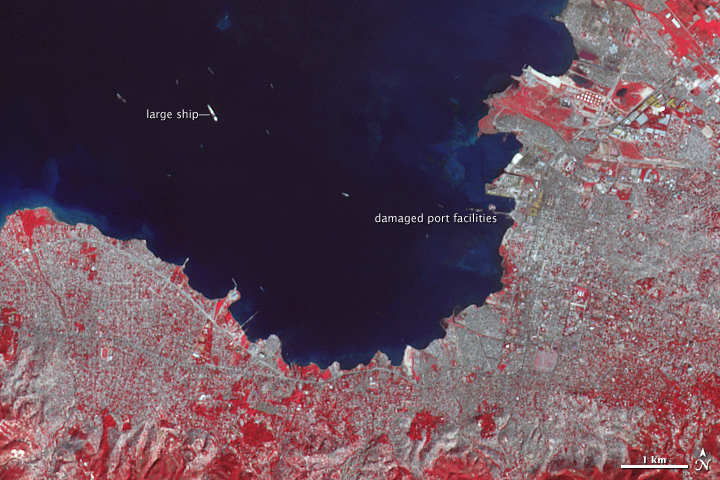 Ships carrying relief supplies and aid were streaming into Port-au-Prince, Haiti, when this image was taken by the Advanced Spaceborne Thermal Emission and Reflection Radiometer (ASTER) on NASA’s Terra satellite on January 21, 2010. The city’s port was badly damaged in the massive 7.0 earthquake that hit the island on January 12. On January 20, one pier re-opened, allowing ships to dock for the first time since the earthquake, said news reports.

The newly reopened pier is the city’s south pier, the narrow strip that juts out into the water in this image. Part of the pier collapsed in the earthquake, but the remaining structure is just stable enough to support a single truck offloading supplies from docked ships, reported CNN.

Tiny streaks of white in the dark blue water are ships. The largest ship in the scene may be the USNS Comfort, a 273-meter- (894-foot-) long U.S. Navy hospital ship that was taking patients by helicopter until a pier could open up, according to Business Week.

Though its capacity is limited, the fragile pier should speed the distribution of food and other supplies to earthquake victims. Prior to January 20, aid had been coming into Port-au-Prince on airplanes arriving on a single runway, said news reports. The ships have a much greater capacity.

Port-au-Prince itself is blue gray in this false-color image. At this scale, the only visible earthquake damage is the shortened pier, but the image does reveal how densely constructed the city was. Plant-covered land is red. Little open, plant-covered ground can be seen in the heart of the city.

On January 12, 2010, a 7.0-magnitude earthquake struck Hispaniola Island, just 15 kilometers (10 miles) southwest of the Haitian capital of Port-au-Prince. More than 30 aftershocks rocked the region over the next day.

This regional view of Port-Au-Prince, Haiti, from January 15, 2010, shows the densely developed urban area and the limited number of transportation hubs available for bringing aid into the earthquake-hit nation.

The GeoEye-1 satellite (a commercial satellite) captured these images of earthquake damage in the densely populated neighborhoods of Port-au-Prince, Haiti, on January 14, 2010.

Rubble spills onto the streets of Port-au-Prince, Haiti, in this GeoEye-1 image from January 14, 2010.

After a catastrophic earthquake left Port-au-Prince in a shambles, many people flocked to the new city of Canaan in search of a better life.