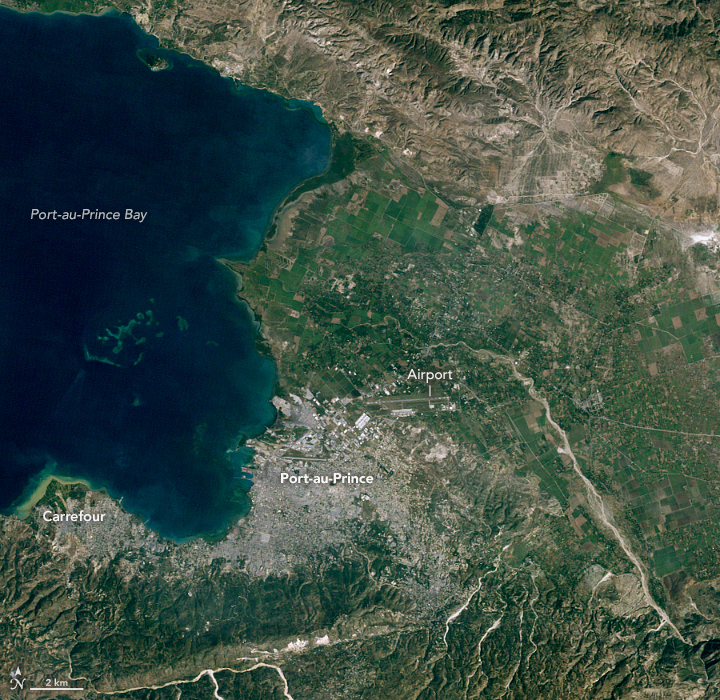 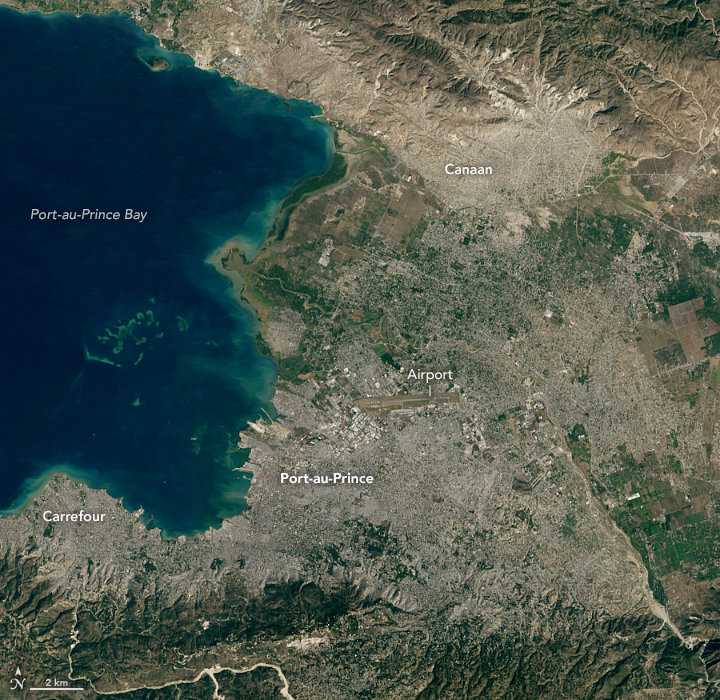 Ten years after a magnitude 7.0 earthquake turned parts of Port-au-Prince into a hellscape, reminders of the catastrophic event appear all over Haiti’s capital. Piles of rubble, half-standing buildings, and fraying aid tents are a visible reminder for a city that saw its population drop by roughly 500,000 people in the year after the earthquake.

But what may be the longest-lasting legacy of the earthquake lies a few miles to the northeast. Before 2010, the only occupants of those windswept hills were groups of goats scrounging for food amidst the arid landscape. Now the area is home to the country’s third largest city, Canaan.

This pair of natural-color Landsat images highlights the growth of Canaan after the earthquake. The left image shows the desolate, deforested land in 1986. The right image shows the city on February 24, 2020, after more than 200,000 people had moved there. The Thematic Mapper (TM) on Landsat 5 acquired the earlier image; the Operational Land Imager (OLI) on Landsat 8 acquired the more recent image.

After the earthquake, more than a million displaced Haitians crowded into makeshift tent cities on golf courses, parks, and other open spaces around Port-Au-Prince. On March 22, 2010, with the wet season bringing flooding and infectious diseases spreading, Haiti’s president declared 50 square kilometers (20 square miles) of open land northeast of the capital city to be public. At the same time, non-governmental aid organizations rushed to establish camps for displaced people in this new land.

But it was not just displaced people that ended up in and around Canaan. As word spread across the country, tens of thousands of Haitians flocked to the area to build a better life in a place that shared a name with the biblical land. But since Canaan was never made an official administrative unit, and since neighboring communes still jockey for control over parts of it, the people living there have long dealt with limited services and a complicated legal and political limbo.

Initially, people mainly lived in tents or in slightly sturdier transitional shelters known as T-shelters. Over time, masons built tens of thousands of more permanent structures. Roads have been constructed, and people have cobbled together what they for water, power, and sewer infrastructure.

The city has grown so rapidly and in such unpredictable ways that even maintaining accurate, updated maps is a challenge. To address this, a non-governmental organization called Missing Maps flew a drone with a high-resolution camera over Canaan in December 2017. In order to plan their flights, the Missing Maps team even used some NASA resources—a digital elevation map (DEM) based on data from the Advanced Spaceborne Thermal Emission and Reflection Radiometer (ASTER) sensor on NASA’s Terra satellite. In 2019, NASA released version 3 of ASTER’s global DEM, a product that is based on more than 2.3 million ASTER scenes.

Canaan is not the only city in this part of Haiti to experience rapid population growth. With large numbers of people living in rural areas moving to Port-au-Prince to pursue economic opportunities, the city's population rose from 927,000 in 1986 to 2.7 million in 2020.

After a catastrophic earthquake left Port-au-Prince in a shambles, many people flocked to the new city of Canaan in search of a better life.

This regional view of Port-Au-Prince, Haiti, from January 15, 2010, shows the densely developed urban area and the limited number of transportation hubs available for bringing aid into the earthquake-hit nation.