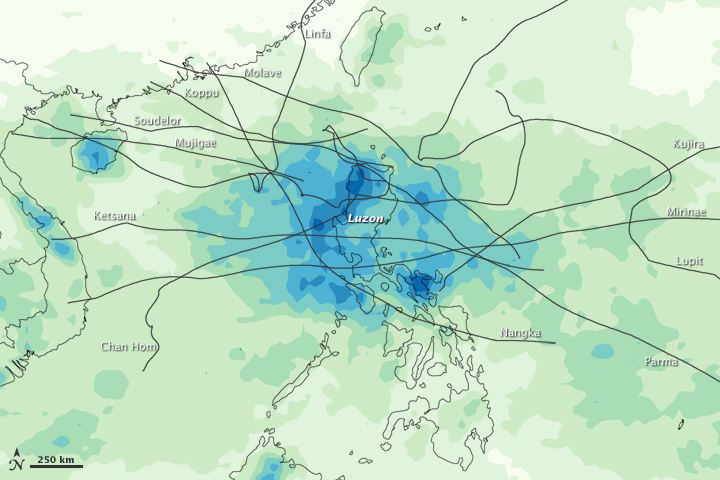 Living on an island in the balmy tropics of the western Pacific, the residents of the Philippines are accustomed to tropical storms. The storms can form at any time of the year, and they frequently impact the island nation as they track west across the Pacific. This image illustrates how much rain the Philippines received from tropical cyclones between May and October in 2009. In that period, 12 named storms poured heavy rain over the Philippines. Two storms, Ketsana and Parma, brought unusually heavy flood-inducing rain within a two-week span at the end of September and early October. The two storms alone left at least 460 people dead.

Only the rain that fell when each of the 12 the storms were active is included in the image. The heaviest rainfall, in excess of 2000 millimeters (80 inches), is shown in dark blue. The highest rainfall totals are over Luzon and the ocean immediately around the island. The season started in May with Typhoons Kujira and Chan Hom. June brought Typhoon Linfa and Tropical Storm Nangka. July saw Tropical Storm Soudelor and Typhoon Molave. Tropical Depression Mujigae and Typhoons Koppu, Ketsana and Parma came in quick succession in September and early October, the most destructive part of the 2009 cyclone season. Late October and early November brought Typhoons Lupit and Mirinae.

The data used to make this image came from the Multisatellite Precipitation Analysis, which calibrates rainfall estimates from many satellites using rainfall measurements from the Tropical Rainfall Measuring Mission (TRMM) satellite. TRMM was launched in 1997, and it carries the first space-based precipitation radar.

Between May and October 2009, 12 tropical cyclones poured rain over the Philippine Islands. This image illustrates how much rain fell over the islands when the storms were active.

Patches of intense rain follow the track of two tropical cyclones in this rainfall image of the Philippines from May 2009.

This image shows rainfall totals in the Western Pacific from September 26 to October 2, 2011, when Typhoon Nesat and Super Typhoon Nalgae caused intense flooding and other storm damage in the Philippines and southeastern Asia.

Heavy Rains from Guchol and Talim