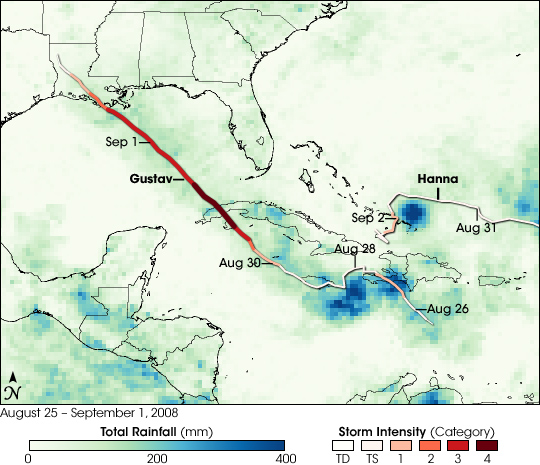 A track of heavy rain marks the passages of Hurricane Gustav and Tropical Storm Hannah through the Caribbean between August 25 and September 1, 2008, in this rainfall image. The image was made with rainfall estimates based on data from the Tropical Rainfall Measuring Mission (TRMM) satellite, and it illustrates two things. First, a tropical cyclone brings intense rain to a broad region, not just to the center of its track, the multi-colored line. Indeed, the heaviest rain, shown in blue, fell to the east or west of the center of both storms, though this could be a function of the way the image was produced. The TRMM satellite measures rainfall rates, the intensity of rainfall, as it passes over a storm. The rainfall totals shown here are estimated based on how much rain was falling in millimeters per hour when TRMM observed the storms between August 25 and September 1. The storms may have poured out more or less rain when the satellite was not overhead.

The second thing that this image illustrates is that rainfall intensity is not necessarily a function of storm size. Gustav seemed to produce more rain as a tropical storm or a weak hurricane than as a powerful Category 4 hurricane. As a tropical storm, Gustav was moving more slowly, staying in one place long enough to deposit a lot of rain. The storm’s center meandered between August 26 and August 29, allowing parts of the storm to linger over or near Haiti for a long time. Hanna’s meandering path on September 1 also resulted in a region of heavy rain over the Turks and Caicos Islands.

Gustav formed off the coast of Hispaniola in the Caribbean Sea on August 25, 2008.