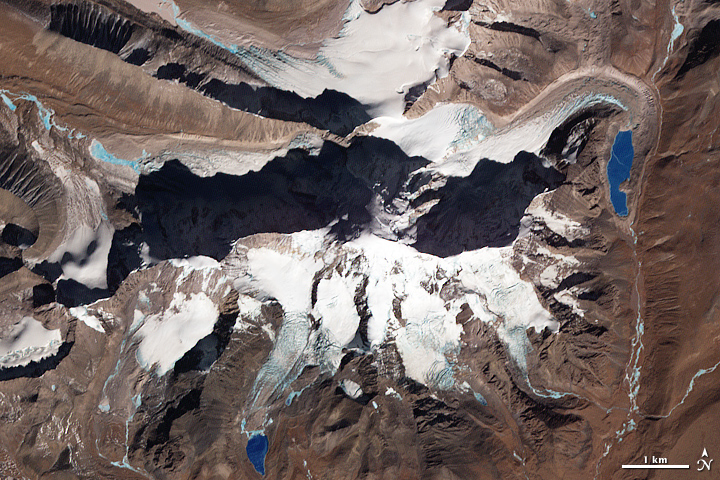 Nicknamed “the Third Pole,” Asia’s Tibetan Plateau contains the world’s largest persistent ice mass outside of the Arctic and Antarctica. On January 5, 2007, the Advanced Spaceborne Thermal Emission and Reflection Radiometer (ASTER) on NASA’s Terra satellite captured this image showing part of a glacier-capped mountain chain about 110 kilometers (70 miles) west-northwest of the Tibetan city of Lhasa.

In this false-color image, snow-free ground appears reddish-brown, snow and ice appear white, and water varies in color from navy to aquamarine. Because the Sun’s angle is low in this wintertime shot, the mountain ridges cast long shadows toward the north. The large, nearly black area spread across the center of the image is a shadow.

The network of jewel-toned lakes in the upper left quadrant of the image likely originates from a small glacier obscured by the shade. Other lake-producing glaciers, however, sit in the sunshine, visible in the upper right and lower left quadrants of the image. Many glaciers are muddied by dirt and rocks they have ground off surrounding terrain.

Besides two deep blue lakes, smaller water bodies the color of aquamarine fringe the glaciers and pool downstream of the larger lakes. Like other water bodies, glacial lakes can vary in color depending on water depth, sediment, or both. Glacier-fed lakes are often brightly colored because of glacial flour—fine sediments that come from the powerful grinding action of glaciers on underlying rocks.

Although the Tibetan Plateau itself is sparsely populated, millions of people in Asia depend on seasonal snow and glacier melt from the plateau for their water supply. Global warming is reducing winter snowpack and causing many Tibetan glaciers to shrink. In the short-term, melting glaciers have increased runoff in some river systems, providing more water, but also causing flooding and increasing the risk of dangerous glacial outburst floods. Many scientists are concerned about the long-term sustainability of glacier-fed water supplies as global temperatures continue to climb.

A range of glacier-capped mountains northwest of Lhasa, Tibet, casts long shadows in this winter-time image from the ASTER sensor on NASA’s Terra satellite.

Like an avalanche, a glacial outpouring can scour the hillside, washing away whole villages. But the slow disappearance of glaciers is a threat more subtle, though just as damaging.

Where some of the park’s most notable glaciers end, a series of colorful glacial lakes begin.