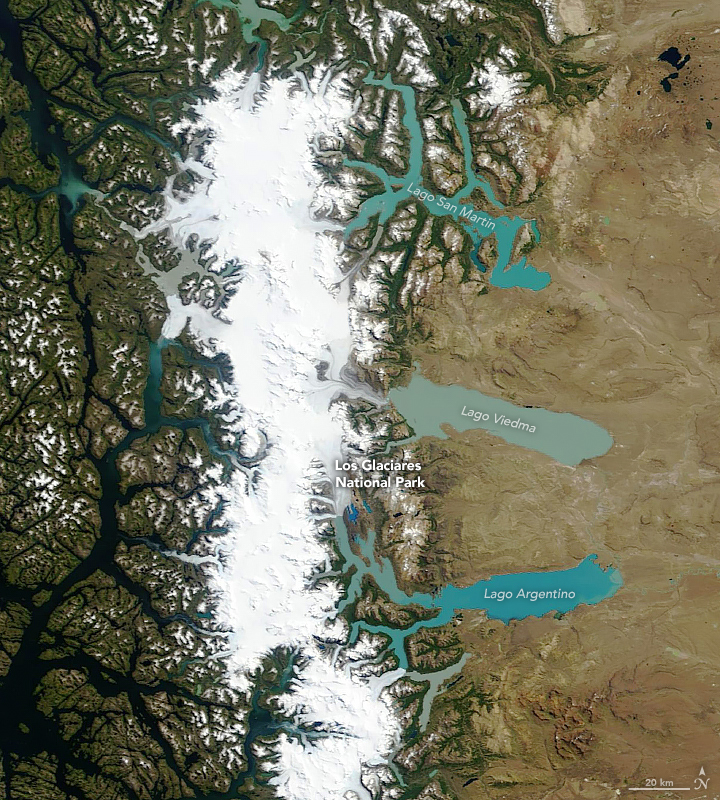 Los Glaciares National Park in Patagonia gets its name from the plentiful glaciers flowing from the flanks of the Andes Mountains. Where some of the park’s most notable glaciers end, a series of colorful glacial lakes begin.

The Moderate Resolution Imaging Spectroradiometer (MODIS) on NASA’s Terra satellite acquired this natural-color image of the South Patagonian Icefield on February 4, 2019. Spanning about 13,000 square kilometers of Chile and Argentina, the icefield is the southern hemisphere’s largest expanse of ice outside of Antarctica. Together with the northern icefield, ice in this region is being lost at some of the highest rates on the planet. Much of the loss happens through more than 60 major outlet glaciers—channels of ice that descend from the icefield.

Most of these glaciers end in water, where their fronts can lose ice by melting and through calving icebergs. Numerous studies have focused on the glaciers on the west side of the southern icefield that dispense ice and meltwater to the Pacific Ocean. But the icefield is losing plenty of ice on its eastern side too, through glaciers that end in freshwater lakes.

Lago Argentino and Lago Viedma are the two main freshwater lakes connected to Los Glaciares National Park. These lakes, as well as nearby Lago San Martin, are filled with so much fine sediment from the glaciers—also known as glacial flour—that they appear milky turquoise when viewed from space.

Notice that Lago Viedma is much grayer than Lago Argentino and Lago San Martin. That’s because Lago Viedma receives sediment-rich-water directly from Viedma glacier—the second-largest in Patagonia. The meltwater pouring out near Upsala glacier is equally gray, but the color changes as the water flows through the fjord. Most of the sediment particles settle to the bottom before reaching the main body of Lago Argentina, which appears bluer.

In recent years, scientists have identified ways in which these freshwater-calving glaciers differ from those that end in seawater. Teasing out those differences is important for understanding the various mechanisms responsible for melting and calving.

Shin Sugiyama, a researcher at Hokkaido University, showed that the high sediment concentration in the freshwater lakes can affect the water’s thermal structure near the ice front. The sediment causes cold, turbid meltwater from the bottom of a submerged glacier to stay at depth. In contrast, cold meltwater from the bottom of a glacier submerged in seawater tends to rise and be replaced with warm water. That means that melting at a glacier’s front in a freshwater lake is probably limited compared to that of its western, seawater-terminating counterpart—at least at depth.

Sugiyama pointed out that even among the freshwater lakes there could be differences in the ice-water interaction. “As suggested by the water colors, conditions are very different at each lake,” Sugiyama said. “I am curious how those glaciers ending in different lakes behave differently in the future.”

Where some of the park’s most notable glaciers end, a series of colorful glacial lakes begin.

Shades of Blue on the Greenland Ice Sheet

When it comes to the blue hue of meltwater lakes, darker means deeper; satellites can help scientists discover just how deep.