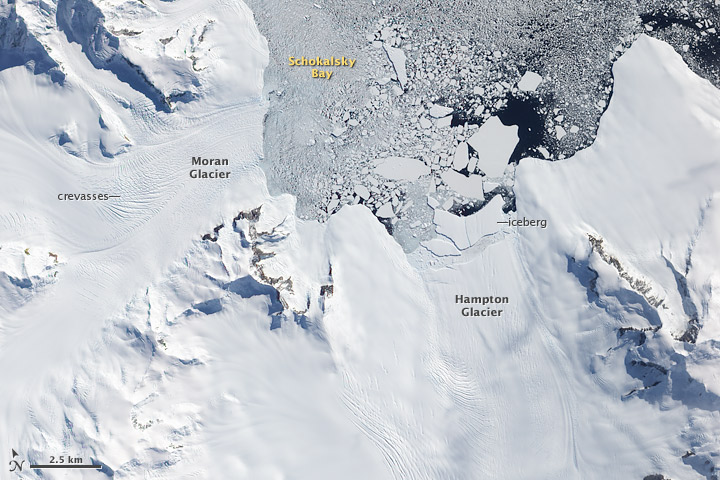 Few places on Earth have warmed more rapidly in recent decades than the Antarctic Peninsula, a narrow, mountainous spine of land that juts out from the continent into the Southern Ocean. More than 400 glaciers—often steep and heavily traced with crevasses—flow out of nearly every nook and cranny of the rugged peninsula, and the regional warming has caused the edges of many of these glaciers to retreat and their flow toward the ocean to accelerate. Faster flow of tidewater glaciers on the Antarctic Peninsula is adding directly to sea level rise.

This image of the northern tip of Alexander Island, near the western base of the Antarctic Peninsula, illustrates one of the processes through which glaciers can contribute to sea level rise: iceberg production. In this image, several large icebergs have calved from Hampton Glacier. Near the glacier, the bergs appear to be partially held in place by a mélange of ice that may include tiny iceberg fragments and frozen sea water. Farther out in Shokalsky Bay, the icebergs are floating more freely. Eventually, the bergs will drift northward to warmer waters, where they will melt.

Measuring the thickness and flow rates of glaciers on the Antarctic Peninsula is one of the objectives of an upcoming NASA aircraft campaign called Operation Ice Bridge. Beginning on October 12, 2009, and continuing for 6 weeks, NASA’s DC-8 research airplane and the Ice Bridge team scientists will make a series of flights from a base in southern Chile to collect observations over West Antarctica, the Antarctic Peninsula, and coastal areas where sea ice is prevalent. Each round-trip flight lasts about eleven hours, two-thirds of that time devoted to getting to and from Antarctica.

Summer on the Antarctic Peninsula