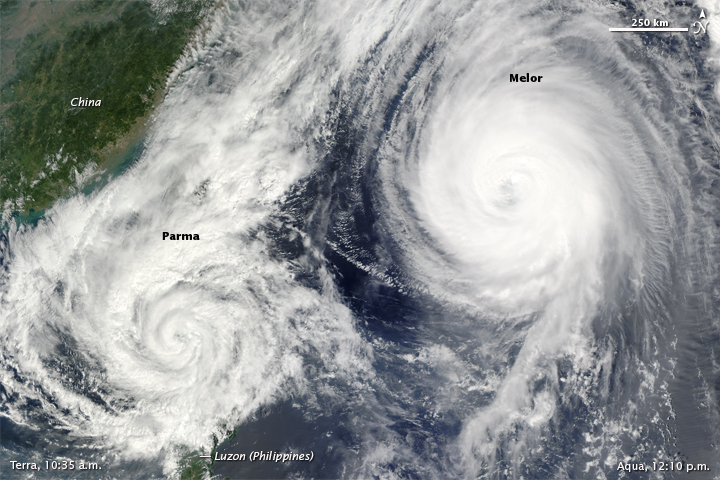 Once a powerful Super Typhoon, Parma crossed over the northern tip of Luzon Island, the Philippines, on October 3, 2009, as a Category 1 typhoon. The storm battered the island with damaging winds and heavy rain before moving over the South China Sea, where it stalled, spinning more or less in place for about a day and a half. On October 6, the storm reversed direction and moved southeast back over Luzon. What caused this change in direction? The answer is shown in this true-color image from October 6. Powerful Super Typhoon Melor moved close enough to Parma to influence its motion.

When two cyclones approach one another, they can interact in a variety of ways. One interaction is the in which the two storms are drawn together and begin to circle each other. In this case, Parma was drawn towards the stronger Melor. Occasionally, the stronger storm will absorb the weaker storm, but that fate wasn’t in the forecast for Parma as of October 6. The Joint Typhoon Warning Center expected Parma to move south away from Melor and eventually track west over the South China Sea on October 8.

This image blends two satellite overpasses to show the proximity of the two storms to one another. The left half of the image, containing Tropical Storm Parma, is from the Moderate Resolution Imaging Spectroradiometer (MODIS) on NASA’s Terra satellite, acquired at 10:35 a.m. Philippine time. The right half of the image was taken just under two hours later by the MODIS instrument on NASA’s Aqua satellite. The time difference causes the subtle differences in lighting from one side of the image to the other.

Parma left at least 22 people dead and damaged millions of dollars of crops and infrastructure in floods and landslides across northern Luzon as of October 6, reported Reuters. The storm is likely to do more damage as it tracks slowly south over the island, pouring heavy rain. The Joint Typhoon Warning Center expected Melor to come ashore over Japan early on October 8 (local time) as a weak Category 1 typhoon.

At the time of these satellite overpasses, Tropical Storm Parma had sustained winds of about 100 kilometers per hour (60 miles per hour or 55 knots), according to the Joint Typhoon Warning Center. The storm maintains a spiral shape, but no longer has the tightly packed bands of clouds exhibited by the much stronger Typhoon Melor. At 12:10 p.m. Philippine time, Melor had sustained winds of about 200 km/hr (130 mph or 115 knots), making it a Category 4 typhoon.

A little over 1,000 kilometers separated the center of Tropical Storm Parma from the center of Typhoon Melor on October 6, when the this composite image was taken.

Typhoon Parma moved westward across the Pacific Ocean in late September 2009. Parma was downgraded to a tropical storm as it passed over the Philippines, but moved back toward the islands, apparently interacting with Typhoon Melor to the northeast. Parma finally dissipated on October 14.

Moving northwest toward southern China and Vietnam, the massive Typhoon Nesat covers most of the South China Sea in this photo-like satellite image from September 28, 2011.

The category 3 storm swept over the Philippines on August 12, 2013.

Acquired August 27, 2011, this natural-color image shows Typhoon Nanmadol over the northern Philippines and the southern tip of Taiwan.

The loose spiraling clouds of Typhoon Chaba are spread across most of the Philippine Sea in this true-color image from October 27, 2010.