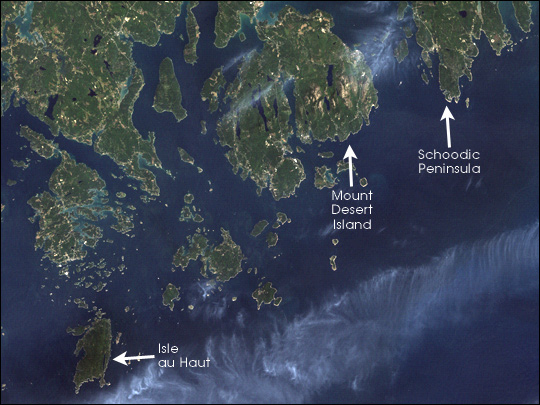 Along the southern coastline of Maine lies Acadia National Park. The park consists of two islands, Isle au Haut and Mount Desert Island, and the tip of the Schoodic Peninsula. Mount Desert is served by a bridge to the mainland, while Isle au Haut is accessible only by ferry.

The park lies in a transition zone between northern coniferous and eastern deciduous forests, with a diverse mix of plant communities and animal species, each existing at the edges of their range. Biodiversity in the park is also enhanced by the convergence of shallow ocean, tidal estuary, and freshwater systems. From the rocky shores typical of the Maine coastline, hills in the park rise to the height of 1,530 feet (462 meters) on Cadillac Mountain on Mount Desert Island. The park is sometimes known by the moniker “Where the mountains meet the sea.”

Acadia National Park was originally called Lafayette National Park when it was established in 1919 by President Woodrow Wilson. It was the first national park in the United States east of the Mississippi. During the late 1800s, many of America’s most prominent and wealthy individuals and families established summer homes on Mount Desert Island.

While they maintained their “cottages” on the island, these families also attempted to preserve the land. One prominent spokesman for preservation was George B. Dorr, who pressed his wealth into the service of preserving the land around the growing town of Bar Harbor. By 1913, he and his like-minded colleagues had set aside 6,000 acres that were offered to the federal government. In 1916 the land became the Sieur de Monts National Monument, which was then later declared a national park. The park’s current name, Acadia, was applied in 1929. The park now encompasses 35,000 acres.

This image was acquired by the Enhanced Thematic Mapper Plus (ETM+) instrument on Landsat 7 on August 9, 2002. This visualization is a true-color image using data from the red, green, and blue wavelengths (ETM+ bands 3, 2, and 1).