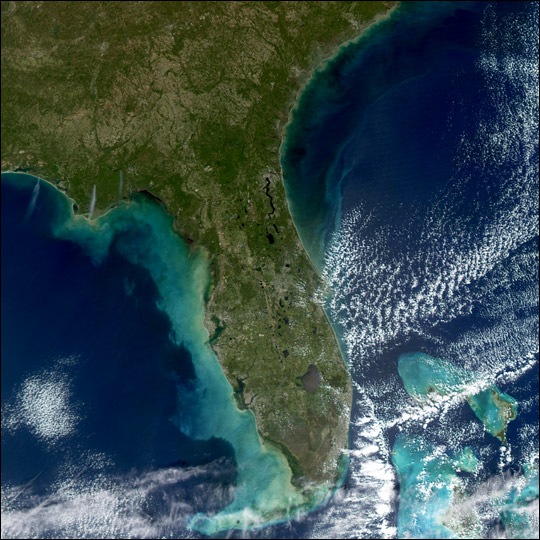 Probably because of the severe storms that passed through the area on the previous day, the Gulf Coast waters off Florida were churned up and cloudy when the Aqua satellite passed overhead on November 20, 2003. The Moderate Resolution Imaging Spectroradiometer (MODIS) captured this image of the state of Florida in the southeast United States and the waters of the Gulf of Mexico (left) and the Atlantic Ocean (right) after the storms had passed through. The turbid (cloudy) waters could be caused by a mixture of sediment churned up by wave action, increased runoff of sediment and organic matter from rivers and streams, and ocean plant life.

The turquoise-colored waters surrounding the Bahamas Islands at lower right are that color all the time; the shallow waters around the island shelf reflect more sunlight than do the deeper waters of the Atlantic that surround them. Even here, however, some of the added cloudiness may be due to the passing storms.

On land, the swamps of the Everglades give the tip of Florida a purplish color, with the West Palm Beach-Fort Lauderdale-Miami megalopolis crowds up against them on the east in a concrete-colored line. A few smoke plumes are drifting out over the Gulf from fires in western Florida.

This image of ocean temperatures on June 30, 2009, shows why storms that form in the early part of the Atlantic hurricane season tend to happen in the Gulf of Mexico and Caribbean Sea.