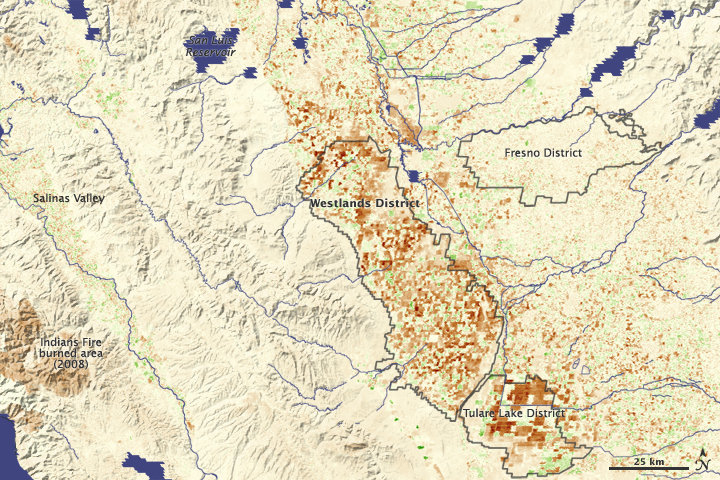 By the end of July 2009, California was well into its third dry year in a row. On average, the state’s reservoirs were running low. In particular, the San Luis reservoir had reached only 18 percent of its capacity by July 28, said the Drought Operations Center for the State of California. The San Luis Reservoir stores water from the Sacramento and San Joaquin River Delta to be distributed through the southern Central Valley. As water levels at the reservoir and elsewhere dropped, many water districts faced restrictions. The impact of those water restrictions on farms in the Westlands and Tulare Lake Districts is illustrated in this vegetation anomaly image.

The image was made from data collected by the Moderate Resolution Imaging Spectroradiometer (MODIS) on NASA’s Terra satellite between July 12 and July 27, 2009. The sensor records the amount of light that photosynthesizing plants absorb and reflect as they grow. The image shows how vegetation fared in 2009 compared to the average conditions from 2000 and 2008. In places where plants were growing more than average, the land is green. Cream shows areas of average growth, and brown points to less plant growth than average. In this image, dark squares of brown are scattered across much of the Westlands and Tulare Lake water districts. These brown squares are fields that would ordinarily support irrigated crops, but in 2009 the crops were not growing well or the fields lay fallow.

The Westlands, reports National Public Radio, is the United State’s biggest irrigated region. Water pumped into the region from the Delta via the San Luis Reservoir supports farms where much of the nation’s fruit, nuts, and produce are grown. It was the last water district to join the federal irrigation agreement, and therefore it is the first to face restrictions during water shortages. Meanwhile, the Fresno District, immediately east of Westlands, had far fewer bare or failing fields.

Drought is not the only factor limiting water availability to farmers in California’s Central Valley. Like many other places throughout the world, California faces difficult decisions about managing its limited water resources. In 2008, California determined to flush more cold river water through the Delta to protect the threatened delta smelt, a small fish that needs fresh cold water to spawn. The fish’s health is an indicator of the overall health of the river. Water and wildlife managers want to allow more water to flow through the Delta to protect the chinook salmon as well. Salmon populations dropped significantly enough in 2008 and 2009 that fishing was banned. But if water is diverted to sustain smelt and salmon, the water is not available to support farms and growing cities.

These extremely difficult decisions are likely to become increasingly common as rainfall patterns shift and glaciers melt as a result of global warming. Most climate models predict that rainfall will become increasingly erratic, with rain coming in big storms separated by longer dry stretches.

Dark brown squares mark fields that would ordinarily support irrigated crops in California’s Central Valley in this vegetation image. In 2009, a lack of water meant that the crops were not growing well or the fields lay fallow.

Reservoirs, lakes, and mountainsides are brimming with water and snow, though scientists caution that underground aquifers are a long way from having the same bounty.

After four years of shrinking due to drought, the largest reservoir in California got a much-needed boost from El Niño-fueled winter precipitation.