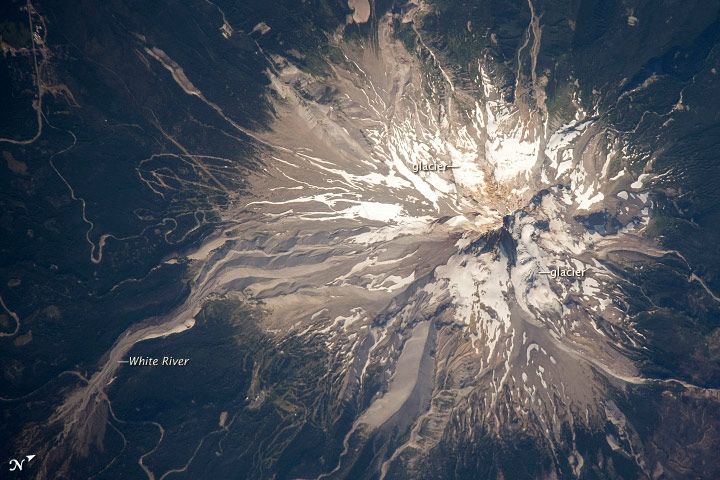 Mount Hood is located within the Cascade Range of the western United States, and it is the highest peak in Oregon (3,426 meters, or 11,240 feet ). The Cascade Range is characterized by a line of volcanoes associated with a slab of oceanic crust that is subducting, or descending underneath, the westward-moving, continental crust of North America. Magma generated by the subduction process rises upward through the crust and feeds a line of active volcanoes that extends from northern California in the United States to southern British Columbia in Canada.

While hot springs and steam vents are still active on Mount Hood, the last eruption from the volcano occurred in 1866. The volcano is considered dormant, but still actively monitored. Separate phases of eruptive activity produced pyroclastic flows and lahars that carried erupted materials down all of the major rivers draining the volcano. Gray volcanic deposits extend southwards along the banks of the White River (image lower left) and form several prominent ridges along the southeast to southwest flanks of the volcano. The deposits contrast sharply with the green vegetation on the lower flanks of the volcano.

The Mount Hood stratovolcano—a typically cone-shaped structure formed by layered lava flows and explosive eruption deposits—hosts twelve mapped glaciers along its upper flanks. Like other glaciers in the Pacific Northwest, the Hood glaciers have been receding due to global warming, and they have lost an estimated 61 percent of their volume over the past century. The predicted loss of glacial meltwater under future warming scenarios will have significant effects on regional hydrology and water supplies.

Astronaut photograph ISS020-E-28123 was acquired on August 5, 2009, with a Nikon D3 digital camera fitted with an 800 mm lens, and is provided by the ISS Crew Earth Observations experiment and Image Science & Analysis Laboratory, Johnson Space Center. The image was taken by the Expedition 20 crew. The image in this article has been cropped and enhanced to improve contrast. Lens artifacts have been removed. The International Space Station Program supports the laboratory to help astronauts take pictures of Earth that will be of the greatest value to scientists and the public, and to make those images freely available on the Internet. Additional images taken by astronauts and cosmonauts can be viewed at the NASA/JSC Gateway to Astronaut Photography of Earth. Caption by William L. Stefanov, NASA-JSC.

In the astronaut photo from August 5, 2009, bright white glaciers cap the summit of Oregon’s Mount Hood, while gray volcanic deposits line the rivers that drain the mountain, and green forests cover the lower slopes.

Towering over the surrounding mountains, Oregon’s second-tallest peak poses a challenge for climbers and satellites.

Three Central American countries—El Salvador, Honduras, and Nicaragua—have coastline along the Gulf of Fonseca, which opens into the Pacific Ocean. The southern boundary of the Gulf is a peninsula formed by the Cosigüina Volcano. Cosigüina is a stratovolcano, which is a cone-shaped volcano formed by alternating layers of solidified lava and volcanic rocks produced by explosive eruptions.

The Nicaraguan volcano erupted for the first time in more than a century.