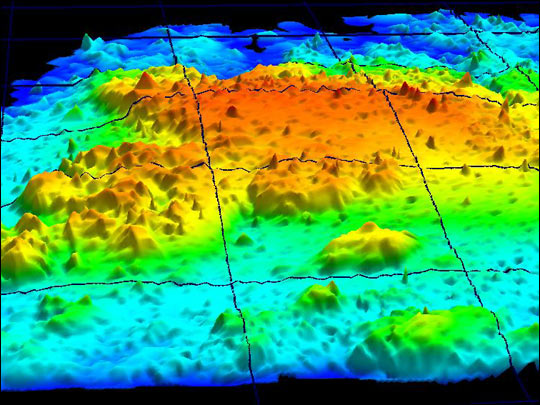 Johnson’s Reef on the northwest shore of St. John Island in the U.S. Virgin Islands forms colorful peaks in this lidar image recorded by NASA’s Experimental Advanced Airborne Research Lidar (EAARL) in June 2003. The coral reef is part of the Virgin Islands National Park. Reef managers could use such a complete picture of the shape of the reef as a standard when tracking reef health, growth, or damage. This EAARL image provides a much-needed overview. Each grid in the image covers 100 square meters of the reef. The red peaks are sections of the reef just one meter below the surface of the water. The dark blue troughs are 10 meters below the surface.

With much of the reef just below the surface of the water, using a boat to map the reef was impossible. Remote sensing from the air was a necessity. Lidar works just like radar, but bounces a laser off of objects to ascertain their distance instead of radio waves. After being flown over the reef in a small airplane, EAARL returned a topographic map that is accurate to within 10 vertical centimeters and 40 horizontal centimeters. Johnson’s Reef is part of an ongoing study conducted by John Brock of the United States Geological Survey and Wayne Wright, of NASA’s Wallops Flight Facility to determine how lidar can be used to measure the growth and health of coral reefs. Brock will explore the reef to match more of its physical traits to the lidar data. Once the scientists better understand exactly what the lidar data tell them about the physical characteristics of the reef, they can then use lidar images for noninvasive insight to the growth and health of coral reefs over time.

Though many coral reefs are made up of different types of coral, Johnson’s Reef is primarily composed of Elkhorn Coral. Resembling moose antlers, Elkhorn Coral is the most complex coral species. A single coral can measure up to two meters across. With much of the coral near to the surface of the water, Johnson’s Reef has suffered extensively from boat damage. Lidar images could become a tool to help reef managers assess the damage each time a boat runs into the reef.

Rowley Shoals, a series of atolls off northwestern Australia, are popular with divers and fisherman interested in the hundreds of marine species.

Rowley Shoals, a series of atolls off northwestern Australia, are popular with divers and fisherman interested in the hundreds of marine species.

Stress on the Great Barrier Reef

In February 2017, the Great Barrier Reef continued to be exposed to warm ocean water—the main stressor on this coral system and the reason for its bleaching.

The Great Barrier Reef is the largest reef system on Earth, with more than 3,000 separate reefs and coral cays. It is also one of the most complex natural ecosystems.