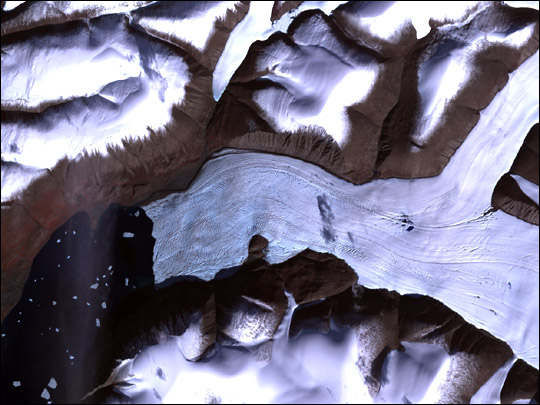 The northeastern corner of Ellesmere Island forms the most northerly extent of Canada. This region has been set aside as the Ellesmere Island National Park Reserve. As such, it is the most northerly park on Earth. The park was established in 1988, but remains in a reserve status while land claim issues are being resolved. The land here is dominated by rock and ice. It is a polar desert with very little annual precipitation and many of the glaciers here are remnants from the last episode of glaciation. The reserve covers nearly 38,000 square kilometers, making it the second largest park in Canada. Some wildlife, including arctic hares, caribou, and musk oxen live in the park, but sparse vegetation and low temperatures support only small populations.

Much of the highlands of the reserve accumulate snow that typically does not melt in the summer, but instead compacts into ice and flows down glaciers and into the Arctic Ocean. In many instances, this occurs in the form of land-based glaciers, which terminate before reaching water, with ice melting into lakes or streams as it drains away. Glaciologists can monitor these glaciers for signs that their ends (termini) are retreating, a possible indicator of regional climate warming. In other instances, the glaciers reach the sea and flow out over the water, breaking apart as icebergs. Such glaciers are known as tidewater glaciers. In these glaciers, the terminus can retreat suddenly and may not reflect short-term regional climate change. Their movement is driven by complex processes related to the thickness of the ice and the depth of the water.

The image above shows a small part of a scene acquired by the Advanced Spaceborne Thermal Emission and Reflection Radiometer (ASTER) aboard NASA’s Terra satellite. (The high-resolution image shows the full scene.) This image shows a tidewater glacier that reaches the sea in the Greely Fjord, situated in the southwestern corner of the National Park Reserve. Icebergs floating in the fjord are most likely chunks that have broken off the glacier. The corrugated surface on the glacier's surface near its terminus is a network of crevasses in the ice that often forms when glaciers flow over rough terrain, or from icefalls that cause the ice to flow in a somewhat rough and turbulent manner. The strong linear features running through the glacier in the direction of its flow are called flow lines. The dark blue features are most likely melt ponds that have formed on the glacier’s. These small ponds are darker than the ice and absorb more sunlight, thus melting more ice and setting up a growing pond. This image was acquired in the late summer, so these ponds are most likely at their largest size here. In other instances, the water will drain away through cracks and crevasses and flow through pipelines in and under the glacier. The water that flows to the bottom forms a lubricant that allows the glacier to flow over the land beneath it with less friction and hence is an important aspect of determining how rapidly the glacier will flow. The rough irregular feature in the center of the image on the glacier is the shadow of a cloud.

This image was acquired on August 4, 2003. It is a false-color composite created by combining near-infrared, red, and green wavelengths (ASTER bands 3, 2, and 1).

Data made available by NASA/GSFC/MITI/ERSDAC/JAROS, and U.S./Japan ASTER Science Team

Melting and thinning of high-mountain glaciers makes them flow less due to gravity.