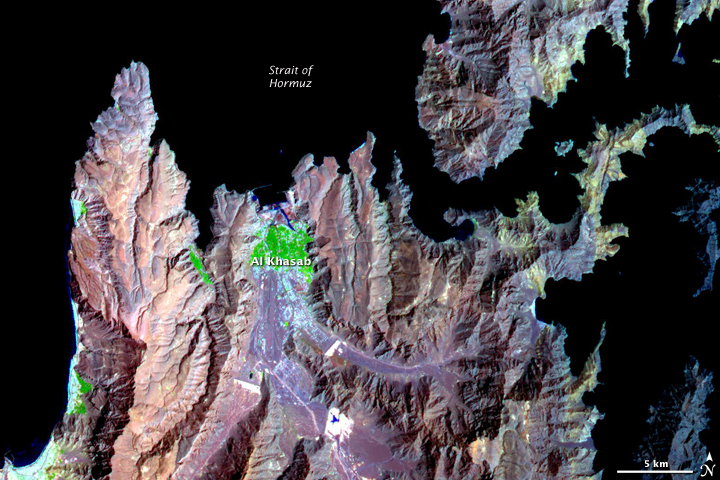 Rocky and rugged, the Musandam Peninsula juts into the Strait of Hormuz, the narrow entry into the Persian (Arabian) Gulf, from the Arabian Peninsula. Musandam is an exclave of Oman, separated from the rest of the country by the United Arab Emirates. Its location gives Oman partial control, shared with Iran, of the strategic strait. This image, captured by the Advanced Spaceborne Thermal Emission and Reflection Radiometer ASTER on NASA’s Terra satellite on March 27, 2004, shows the western tip of the peninsula. The full peninsula is shown in the large image.

Musandam’s largest city, Al Khasab, is jewel-like in the brilliant contrast between its vivid shades of blue, white, and green and the more subtle rainbow tones of the surrounding rock in this false-color image. The term Khasab refers to the fertility of the soil. The land around the city clearly sustains agriculture as evidenced by the bright green plant-covered land. Spots of green highlight other settlements along the coast. Man-made surfaces are pale blue and white. Fishing, agriculture, and ship building are the primary industries in Musandam, reports the government of Oman, and the statement is supported by the coastal locations of the settlements and the green surrounding them in this image.

Apart from Al Khasab and other settlements, the rocky peninsula is barren. The limestone mountains are colored yellow, brown, and red by traces of iron or gray by magnesium. The rugged coastline resembles the glacier-carved coasts of polar regions, but in this case, the coast was shaped by the movement of Earth’s crust. The Arabian plate is slowly pushing under the Eurasian plate, creating the earthquake-prone mountains of Iran. On the leading edge of the Arabian plate, the Musandam Peninsula is sinking. The higher elevation mountains remain above the water, but the sea has rushed in to fill the valleys with fingers of water.

The rocky, fjord-like fingers of the Musandam Peninsula jut into the narrow Strait of Hormuz at the mouth of the Persian Gulf in this detailed image from the Advanced Spaceborne Thermal Emission and Reflection Radiometer on NASA's Terra satellite.

Much of Oman’s landscape is low-lying, hot, and dry. Northern Oman, however, contains rugged mountains, some of the highest elevations in eastern Arabia, and varied vegetation.

In plume of dust snakes east from the Arabian Peninsula over the Arabian Sea in this photo-like image from March 30, 2011.

Clouds hugged the east coast of the Kamchatka Peninsula while skies inland remained clear at the end of May 2009.