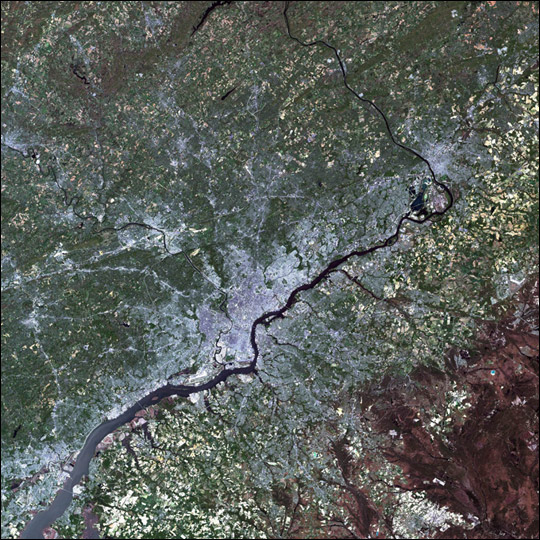 Known as the City of Brotherly Love, Philadelphia, Pennsylvania, has one of the richest histories of any city in the United States. The city was founded in 1681 by Captain William Markham under the direction of William Penn, who saw the area as a refuge for Quakers. Philadelphia quickly became the cultural and industrial center of the then British colonies. From 1774 to 1776, the First and Second Continental Congress convened in Philadelphia to discuss uniting the colonies and breaking away from the British Empire. In 1776, the Declaration of Independence was signed in Independence Hall, located in the heart of the city. Philadelphia served as the capital of the United States from 1781 until the national government moved to Washington, D.C., in 1800.

Today, the Philadelphia metropolitan area houses a population of more than 6 million people and remains one of the industrial centers of the country. In the above image, the Delaware River, which separates New Jersey from Philadelphia, can be seen running along the southeastern edge of the city. Developed areas in and around the city are gray. The patchwork of off-white and green land around the city is farmland. The dark brown areas in the lower righthand corner of the image are the Pine Barrens, which are wetlands in western New Jersey.

This simulated color image was acquired by the Landsat 7 Enhanced Thematic Mapper plus (ETM+) on April 24, 2000.