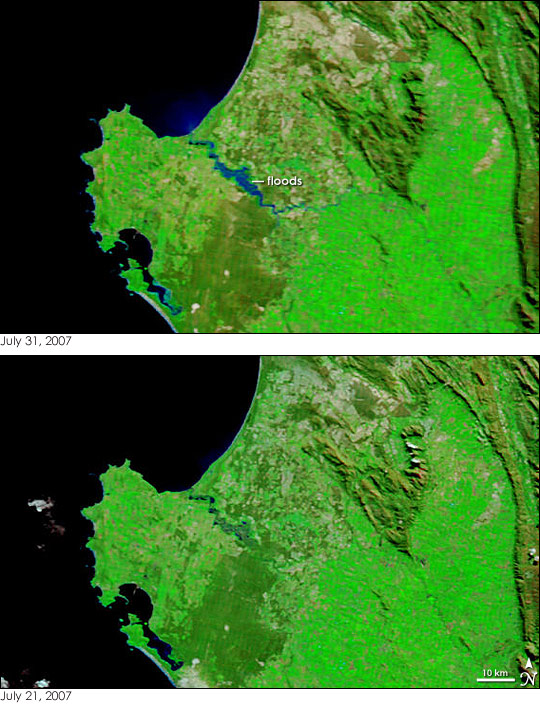 Days of heavy rain brought floods to South Africa’s Western Cape province in late July and early August 2007. The Moderate Resolution Imaging Spectroradiometer (MODIS) on NASA’s Terra satellite captured the top image of a flooded river flowing into Saint Helena Bay on July 31, 2007. The lower image, acquired on July 21, shows the region before the flooding started. In the top image, the flood-swollen river is bright blue, colored with sediment. By contrast, the Atlantic Ocean to the west is black. Additional flooding is visible in the large image. Floods in Cape Town (south of the area shown here) forced up to 40,000 people from their homes in shanty towns outside the city, reported ABC News on July 31. Even as southwestern South Africa grappled with floods, intense fires raged in the northeast.

These images were made with a combination of visible and infrared light to highlight the presence of water on the ground. Water is blue or black, and plant-covered land is green. Crops growing in the wide valley east of the river are bright green. Natural vegetation elsewhere in the image is darker green. Bare or sparsely vegetated land is tan. The large image provided above is at MODIS’ maximum resolution of 250 meters per pixel. The MODIS Rapid Response System produces daily images of South Africa in false color (as shown here) and photo-like true color.