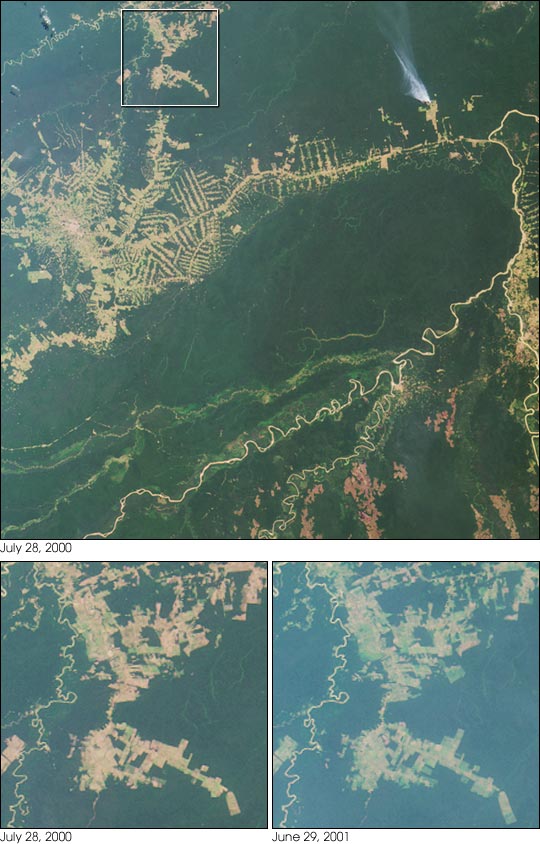 Settlement and deforestation surrounding the Brazilian town of Rio Branco are seen here in the striking “herringbone” deforestation patterns that cut through the rainforest. Rio Branco is the capital of the Brazilian state of Acre and is situated near the border with northeastern Bolivia. The town is a center for the distribution of goods, including rubber, metals, medicinal plants, Brazil nuts and timber. Colonization projects in the region are supported by farming, logging activities, and extensive cattle ranching. Much of the the surrounding terrain is of a poorly-draining clay hardpan soil, and heavy rainfall periodically converts parts of the forested region to swamp.

The large overview image was acquired by the Multi-angle Imaging SpectroRadiometer’s vertical-viewing (nadir) camera on July 28, 2000, and covers an area of 333 kilometers x 333 kilometers. A plume of smoke is visible north of the Rio Branco road, which roughly parallels the slender, twisting Rio Abuna. Most of the major rivers in the image provide reference points for state or international (Bolivia- Brazil) boundaries, and flow northeast to the Rio Madeira (east of the smoke plume). The border between Acre and the Bolivian department of Pando is marked by the Rio Abuna. Pando’s southern boundary with the department of Beni is marked by the Rio Madre de Dios, the large river in the lower half of the image.

The two higher-resolution inset images highlight a settled area north of the town of Rio Branco. These nadir views cover an area of 60 kilometers x 60 kilometers, and were acquired eleven months apart. In the later image, more haze is present, possibly due to smoke from fires on that day. Comparing the two images provides a method of measuring the changes and expansion in the area of cleared land. One newly cleared patch is apparent near the middle of the later image, slightly off to the right. This polygon represents an area of about 16 square kilometers, or 4000 acres. Other recent clearings can be observed directly beneath this area, as well as toward the lower right-hand corner.

The fast-growing and affluent neighborhood of Barra da Tijuca will host much of the 2016 Olympic Games.