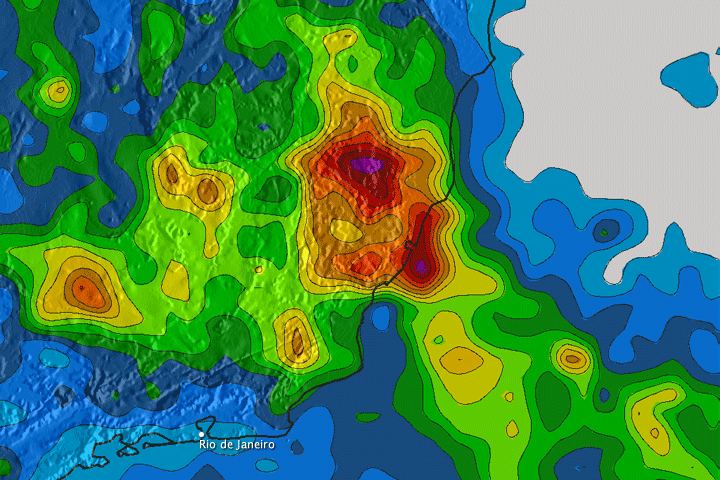 Torrential rain inundated southeastern Brazil in early January 2012, causing severe damage in multiple states. The floods forced thousands from their homes, damaged roads and homes, and broke through a levee in northern Rio de Janeiro State, according to news reports.

This image shows regional rainfall, as observed by the Tropical Rainfall Measuring Mission (TRMM), from December 30, 2011, to January 6, 2012. Rainfall amounts are color coded, with the lowest amounts in blue and the highest amounts in red and purple. A band of heavy precipitation extends roughly northwest-southeast. Some of the heaviest rainfall occurs north of Rio de Janeiro, capital city of the state of the same name.

On January 9, 2012, The Rio Times reported that flooding affected the states of Minas Gerais, Rio de Janeiro, and Espirito Santo. So far, damage was apparently most severe in Minas Gerais.

Floods, landslides, and a burst levee forced thousands from their homes in southeastern Brazil in early January 2012.