Subtropical Storm off the Coast of Oregon 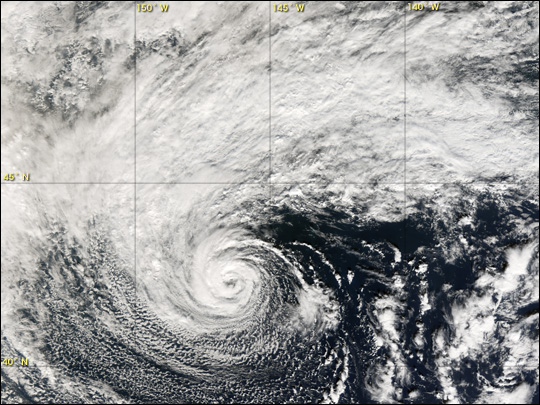 This photo-like image of a rare subtropical storm in the Pacific Ocean was acquired by the Moderate Resolution Imaging Spectroradiometer (MODIS) on the Terra satellite on November 1, 2006. Located 900 miles off the coast of Oregon in the northwestern Pacific, this storm system looks like a hurricane, but it is located far from any of the typical hurricane formation areas. The storm originally formed from a cold-cored extratropical storm, but after spending two days over unusually warm water (perhaps as much as 2 degrees Celsius above normal for the time of year), it developed a warm center, and hurricane characteristics, such as a cloud-free eye and an eyewall of thunderstorms. With satellite-observed winds as high as 50 knots on November 2, the storm was strong enough to have been named if it had been in one of the routinely monitored hurricane basins. Because it formed outside the territory of any monitoring organizations, however, it was not named. The storm was being referred to as “Storm 91C” by the U.S. Navy.

You can download a 250-meter-resolution KMZ file of Storm 91C for use with Google Earth.