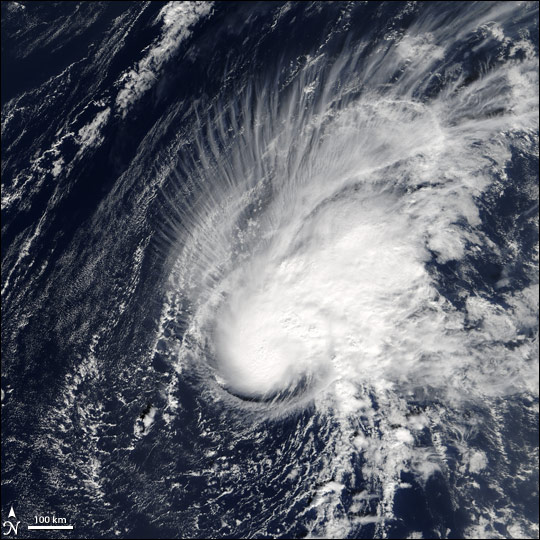 The 2005 Atlantic Hurricane season has been one of new records and surprises. December 30, 2005, saw yet another unexpected addition to the year’s weather events: Tropical Storm Zeta. The Moderate Resolution Imaging Spectroradiometer (MODIS) flying onboard the Terra satellite captured this image several days later on January 3, 2006, at 13:45 UTC (roughly 11:45 a.m. local time). At that time, Zeta still had sustained winds of around 100 kilometers per hour (63 miles per hour), a steady strength the storm has now maintained for several days, with a very slight increase in power.

After the previous record-holding storm season of 1933, which saw 21 named storms, weather forecasters established a convention of using just 21 letters of the alphabet (the last letter being W) to begin the names of Atlantic tropical storms. After Hurricane Wilma in October 2005, forecasters turned to the Greek alphabet. Zeta is the sixth letter of that alphabet, and this is the 27th named storm of 2005. One month after 2005’s record-breaking storm season officially ended, this storm appeared roughly 1,600 kilometers (1,000 miles) to the southwest of the Azores Islands.

A tropical storm is characterized by winds of at least 63 kilometers (39 miles) per hour. To be categorized as a hurricane, a storm needs winds of more than 119 kilometers (74 miles) per hour. As Tropical Storm Zeta formed, ocean temperatures didn’t appear warm enough to escalate Zeta into a hurricane, and news reports described it as no immediate threat to any land areas.

December 30, 2005, saw an unexpected addition to the year's weather events: Tropical Storm Zeta. Zeta is the 27th named storm of 2005.