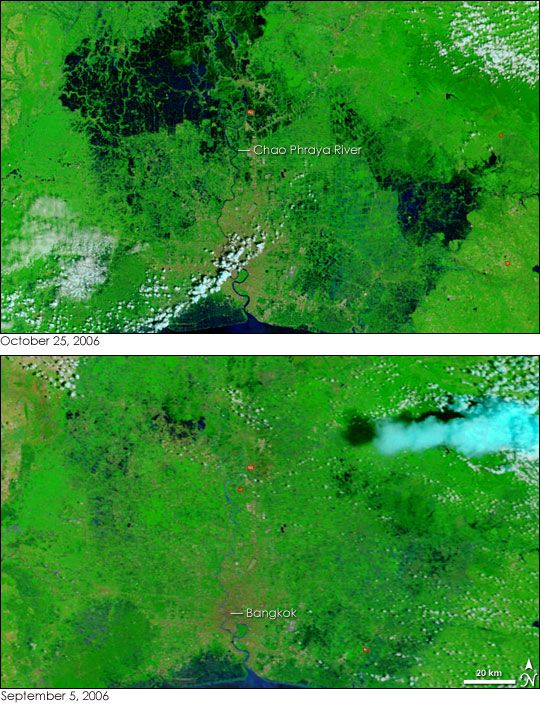 Widespread flooding swept through central and northern Thailand from August through October 2006, in response to seasonal monsoon rains. Though monsoon floods are normal, 2006 saw exceptional flooding. By October 25, flood waters surrounded the country’s capital, Bangkok. In these images, the city stretches out from the eastern bank of the Chao Phraya River in a tan grid. Water, dark blue and black, encroaches on the city from all sides. The largest floods are in the north along the Chao Phraya, but additional floods pool on the east side of the city. According to The Nation, a Bangkok newspaper, floods throughout the country had impacted more than three million people and killed 104 people from late August through October 21.

The Moderate Resolution Imaging Spectroradiometer (MODIS) on NASA’s Terra satellite took both of the above images. The lower image, from September 5, shows the Bangkok area before the floods had extended to the region. Both images were made with visible and infrared light to highlight the presence of water. In this type of image, plant-covered land is bright green, lightly or non-vegetated land is tan, clouds are pale blue and white, and water is dark blue or black. Fires have been outlined in red. The MODIS Rapid Response Team provides daily images of Thailand in both false color, such as the images shown here, and photo-like, natural color.

Though floods are not unusual in Thailand during the summer monsoon season, 2006 brought unusually heavy flooding.

Floods in the U.S. Midwest