Late Bloomers in the Arctic 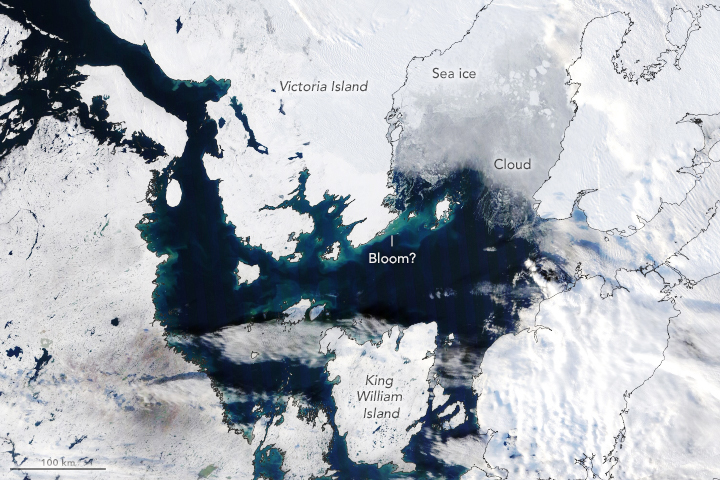 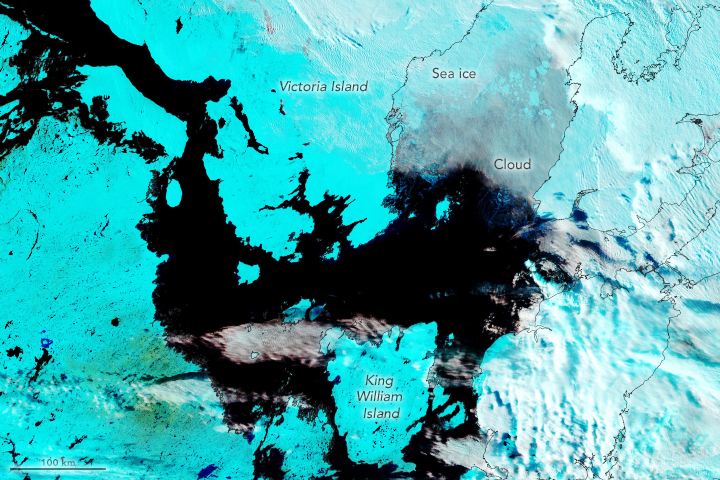 Though summer has long since passed and Arctic waters should be starting to freeze, a break in the clouds in October 2021 suggested that not everything in the far north is ready to hibernate. In the late morning on October 14, the Moderate Resolution Imaging Spectroradiometer (MODIS) on NASA’s Terra satellite acquired these natural- and false-color images of Victoria Island and King William Island in Canada’s Nunavut Territory. The false-color combination of visible light and infrared (bands 7-2-1) helps distinguish ice (cyan) from clouds (gray and white).

Though it is impossible to know without in situ sampling of the water, the scene appears to show late-season blooms of phytoplankton around these Arctic islands. Coccolithophores, which can form massive blooms in high-latitude waters, have tiny calcium-carbonate scales that make water appear milky blue when these phytoplankton grow in abundance. The light colors in the water could also be due to outflows of sediment from the islands, which would suggest that streams are still running and snow and ice are still melting in the late-season sunlight. Still a third possibility is that tides or storms have churned up seafloor sediments.

In a study published in 2020, researchers from Stanford University found that phytoplankton in Arctic waters have been growing more abundant and thriving for more of the year. Between 1998 and 2018, the rate of growth of phytoplankton biomass across the Arctic Ocean and surrounding seas increased by 57 percent. Some of the change was due to increasing expanses of open water, while some was due to a longer growing season as the region grows warmer and ocean properties change.

In the October 2021 images, the clouds over water (upper right) hint at another change that has been occurring in the Arctic. More frequent and larger patches of open water in the region mean there are often more clouds and moisture in the air. In a study focused on the formation of polynyas (patches of open water amid sea ice) north of Greenland, a NASA-led research team measured and analyzed how exposed seawater can fuel the formation of more clouds. Such clouds can trap more heat in the atmosphere and hinder the refreezing of new sea ice.

“We are getting more heat and moisture from the ocean going into the atmosphere because the sea ice acts like a cap or a barrier between the relatively warm ocean surface and the cold and dry atmosphere above,” said Linette Boisvert, a sea ice scientist at NASA’s Goddard Space Flight Center. “When the lid is removed, heat and steam escape into the air. This warming and moistening of the atmosphere slows down the vertical growth of the sea ice, meaning that it will not be as thick, so it’s more vulnerable to melt in the summer months.”

Not everything in the far north appears ready to hibernate for the winter.

Image of the Day Water Snow and Ice Water Color