Sands and Mats at Padre Island 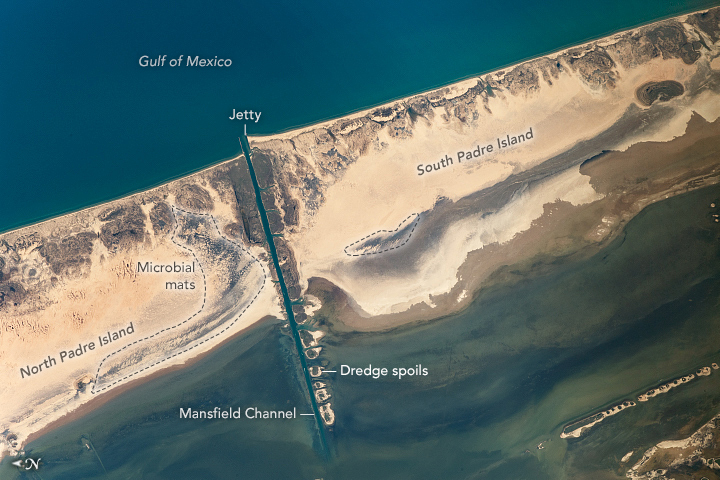 An astronaut on the International Space Station (ISS) shot this photograph of a portion of Padre Island, a long barrier island along the southern Texas coast.

Once an unbroken stretch of land, the island was separated into North and South Padre with the cutting of Mansfield Channel—first through private efforts in 1957, and then by the Army Corps of Engineers in 1962. The channel connected the fishing community of Port Mansfield to the Gulf of Mexico and established a new harbor between Corpus Christi and Brownsville.

Jetties mark the entrance from the Gulf into the channel; dredge spoils from the excavation line the southern side. Those jetties disrupt the natural longshore transport of sediment along the coast, causing sand to erode on the north side and build up on the south side. For this reason, the beach appears wider and extends farther seaward on South Padre Island. Stretching north from the channel, Padre Island National Seashore protects nearly 80 miles (130 kilometers) of beaches for nature and recreation.

North and South Padre Islands are well known for attracting tourists and beachgoers, but they have also intrigued scientists. This photograph was taken in response to a request made by scientists to the NASA Crew Earth Observations team. Researchers are investigating changes in dune morphology and in the microorganisms that live on the surface of the island.

As is typical of many barrier islands, sand dunes line the coast of Padre, forming a natural barricade and mitigating inland damage from storms like hurricanes. Extensive microbial mats—multi-layered sheets of microorganisms such as bacteria—take advantage of this natural protection and thrive in the protected tidal flats along the backshore of Padre Island. These areas of rich microbial life stand out as darker sections of beach in the photo. Microbial mats like these are among the oldest forms of life that have been identified within Earth’s rock record. Many scientists believe that such mats are the best astrobiological analogues for how life might have existed on Mars.

Astronaut photograph ISS063-E-76217 was acquired on August 20, 2020, with a Nikon D5 digital camera using an 800 millimeter lens and is provided by the ISS Crew Earth Observations Facility and the Earth Science and Remote Sensing Unit, Johnson Space Center. The image was taken by a member of the Expedition 63 crew. The image has been cropped and enhanced to improve contrast, and lens artifacts have been removed. The International Space Station Program supports the laboratory as part of the ISS National Lab to help astronauts take pictures of Earth that will be of the greatest value to scientists and the public, and to make those images freely available on the Internet. Additional images taken by astronauts and cosmonauts can be viewed at the NASA/JSC Gateway to Astronaut Photography of Earth. Caption by Sara Schmidt, GeoControl Systems, JETS Contract at NASA-JSC.