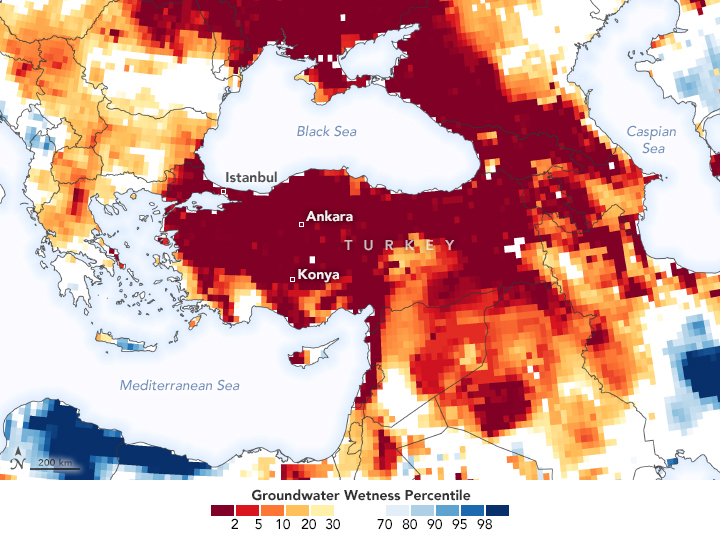 As 2021 begins, most of Turkey is experiencing severe drought. Numerous reservoirs around Istanbul—the country’s most populous city (15 million)—have reached their lowest water storage levels in 15 years. Crop production could be threatened if conditions persist.

The dry conditions come after several seasons of low rainfall. In 2019, the summer and autumn months were mostly devoid of rain, and water levels in reservoirs dwindled. Then 2020 was the driest of the past five years, with notably little rainfall in the latter half of the year. Since July 2020, nearly all provinces in Turkey received below-average rainfall nearly every month. From October to December, precipitation across the country was 48 percent lower than the average for 1981-2010.

The map above shows shallow groundwater storage as of January 11, 2021, as measured by the Gravity Recovery and Climate Experiment Follow On (GRACE-FO) satellites. The colors depict the wetness percentile, or how the amount of groundwater compares to long-term records (1948-2010). Blue areas have more water than usual, and orange and red areas have less.

Groundwater in aquifers is an important resource for crop irrigation and drinking water in many countries, and it also can sustain streams during dry periods. Groundwater take months to rebound from drought, though, as it has to be slowly and steadily replenished by surface moisture that seeps down through soil and rock to the water table. 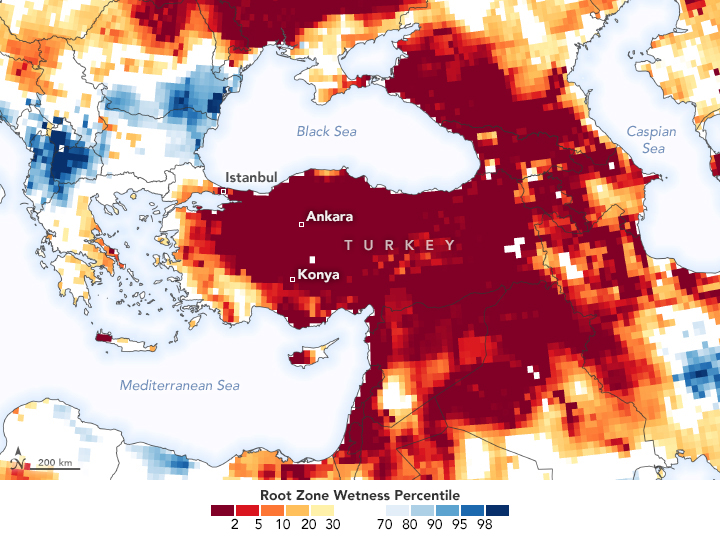 The second map shows GRACE-FO estimates of soil moisture in the root zone—the top meter (39 inches) of soil—as of January 11, 2021. Moisture in this zone is important for agriculture because it is the water naturally available for growing crops. Root zone moisture can fluctuate widely over short periods, as it can be quickly replenished by rain or evaporated by dry spells.

Due to the lack of rain and high water demands, officials said Istanbul could run out of water in months if current conditions continue. As of January 13, 2021, storage rates from at least seven reservoirs around Istanbul measured just below 25 percent.

In the Konya Plain, farmers experienced about 38 percent less precipitation from July to December 2020 than the same time in 2019. The lack of rainfall in the past six months has dramatically reduced grain harvests and triggered drought alerts for farmers, leaving uncertainty for future crop production.

Forecasts call for more rain in the second half of January 2021, but it would take extended, persistent rain to raise water levels to comfortable volumes. The mayor of Ankara warned that a continued lack of rain could cause a significant shortage by the summer.

Nearly 65 percent of the country’s reservoirs were running dry in June 2019.