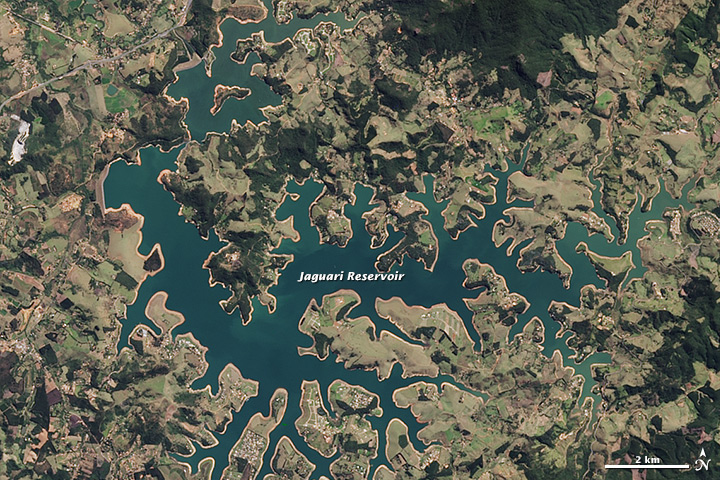 Southeastern Brazil is suffering through one of its worst droughts in decades. The situation is worst near the city of São Paulo (home to about 20 million people) and in São Paulo state. Rainfall totals for the year are 300 to 400 millimeters (12 to 16 inches) below normal, and reservoirs have dwindled to 3 to 5 percent of storage capacity.

The Operational Land Imager on the Landsat 8 satellite acquired these two natural-color views of the Jaguari Reservoir in Brazil. The top image shows the area on August 3, 2014 (the most recent cloud-free view of Jaguari); the second image shows the same area on August 16, 2013, before the recent drought began. Jaguari is one of five reservoirs in the Cantareira System, which supplies water to roughly half of the people in the São Paulo metropolitan area.

Turn on the image comparison tool to see the change in water levels, which is best indicated by the tan outline around the water’s edge. Even in 2013, the reservoir appeared to be surrounded by a low-water “bathtub ring.” The water is also a lighter blue-green in 2014 because it is shallower, with sediment and the lake bottom altering the color of the water surface. Note that in the two months since the 2014 Landsat image (top) was acquired, reservoirs continued shrinking from roughly 12 percent capacity to 4 percent.

The drought began last austral summer (December to February), when São Paulo state received about one-third to half of its usual amount of rain during what should have been its wettest season. In the seven months since, rainfall has been about 40 percent of normal. Across southeastern Brazil, production of key crops like coffee and sugar are in steep decline, and citizens are facing periodic outages in the water supply—even as news agencies report that local water authorities have not instituted conservation measures.

“The climate of the region is seasonal, with a rainy summer and a dry winter, and the drought has extended through the current dry season and the past rainy season,” noted Marcos Heil Costa, climate scientist at the Universidade Federal de ViÃ§osa. “To make things worse, the onset of the rainy season—which usually happens in late September or early October—has not happened yet.”

“For the last rainy season, the pattern [of reduced rainfall] has been observed in the past, though the intensity was unprecedented this year,” Costa added. “For the dry season, coincidence or not, it looks exactly like what has been predicted by IPCC for a warmer climate. And it is now clear that our policies on management of water resources are unsustainable. No city in southeast Brazil seems prepared to handle a drought like this one. It is a mix of a lack of preparation for low levels of rain and a lack of environmental education in the population. Most people continue to use water as if we were in a normal year.”

The region around São Paulo fell into its worst dry spell in a century.

Prolonged dry conditions have caused the worst drought in central and southern Brazil in almost a century.

As the wet season approached in South America, intense drought still ran deep across the Amazon basin and much of Brazil.