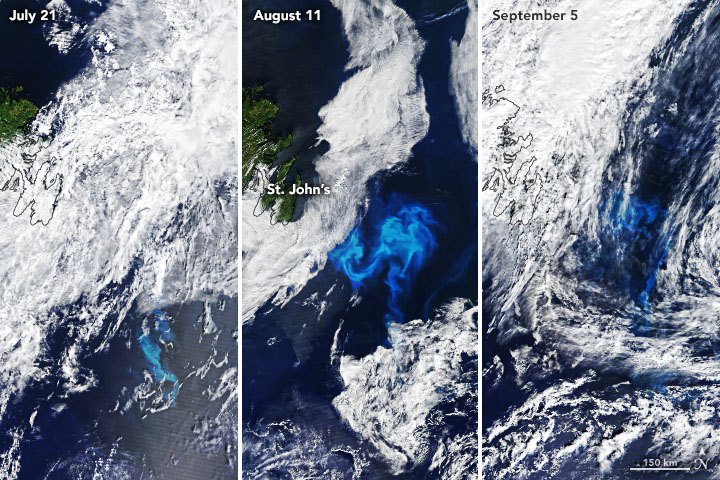 In the late summer of 2019, the waters off of Newfoundland teemed with phytoplankton for three weeks. It seemed extraordinary at the time. One year later, the Northwest Atlantic bloomed persistently for two months, and the reasons are not entirely clear.

Traces of phytoplankton first became visible southeast of St. John’s, Newfoundland, in mid-July 2020, and the floating, microscopic plant-like creatures were still visible to satellite imagers in mid-September. The natural-color images above were acquired by the Moderate Resolution Imaging Spectroradiometer (MODIS) instruments on NASA’s Terra and Aqua satellites on July 21, August 11, and September 5, 2020. Norman Kuring of NASA’s Ocean Color Group also created an animation of the event.

The turquoise-colored bloom was likely made up of coccolithophores of the species Emiliania huxleyi, which are common to this area in summertime. The phytoplankton have chalky outer shells made of calcite, so they give the water a milky blue color when they aggregate in great numbers. Emiliania huxleyi cells are about 5 micron across—1,000 times smaller than a grain of sand—so their numbers have to be incredibly abundant for MODIS to detect them.

Phytoplankton are common in the North Atlantic in spring and summer; they are also becoming more common around the Arctic Ocean and other far northern seas. But it is not often that one species blooms so much for so long because any given species needs just the right balance of sunlight, nutrients, water temperatures, and salinity. In recent years, Emiliania huxleyi has bloomed most abundantly in this area in mid-summer. It is not yet clear why the bloom here lasted so long and late in 2020.

“Seven weeks is a long time for a single bloom driven by a single nutrient enrichment event. Usually, those blooms last two to three weeks,” said Barney Balch, a biological oceanographer at Bigelow Laboratory for Ocean Sciences. “However, events this long are not uncommon for features that are continually being sustained by a specific ocean process—such as a supply of water with a specific suite of nutrients. (The Patagonian Shelf bloom is one such example.) In such long-lived features, the coccolithophores outcompete everything else and can sustain maximal growth rates for extended periods.” 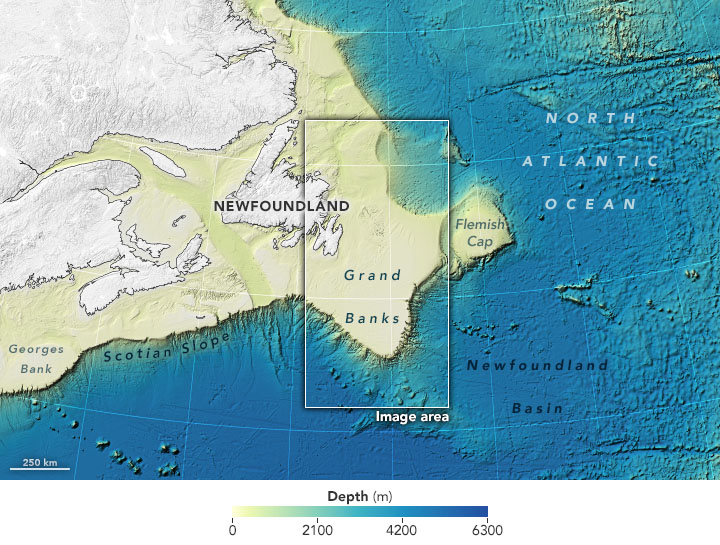 “One might guess that the location of the bloom was in some way tied to the submarine topography,” suggested Kuring. “Shelf-edge dynamics probably have something to do with funneling the right conditions to the bloom.”

The recent blooms have occurred near the edge of the Grand Banks and the Flemish Cap, underwater plateaus that are relatively shallow (50 to 200 meters depth) and sit at the edge of the continental shelf. The cold waters of the Labrador Current and the warmer waters of the Gulf Stream intersect and interact over these banks, creating circulation patterns that can enrich the waters with nutrients. The shape of the seafloor, which rises to these plateaus, also promotes upwelling of nutrients from the depths. Those abundant nutrients can enhance the productivity of phytoplankton.

The plant-like organisms become food for zooplankton, shellfish, and other marine creatures on up the food chain. The waters near the Grand Banks are incredibly productive and home to some of the richest fisheries in the world, particularly for swordfish, haddock, lobster, cod, and scallops.

The waters around Newfoundland have been teeming with phytoplankton since the beginning of September.

Unusually clear skies and persistent, unseasonable heat may have set the stage for large and persistent blooms of phytoplankton in the waters around England.