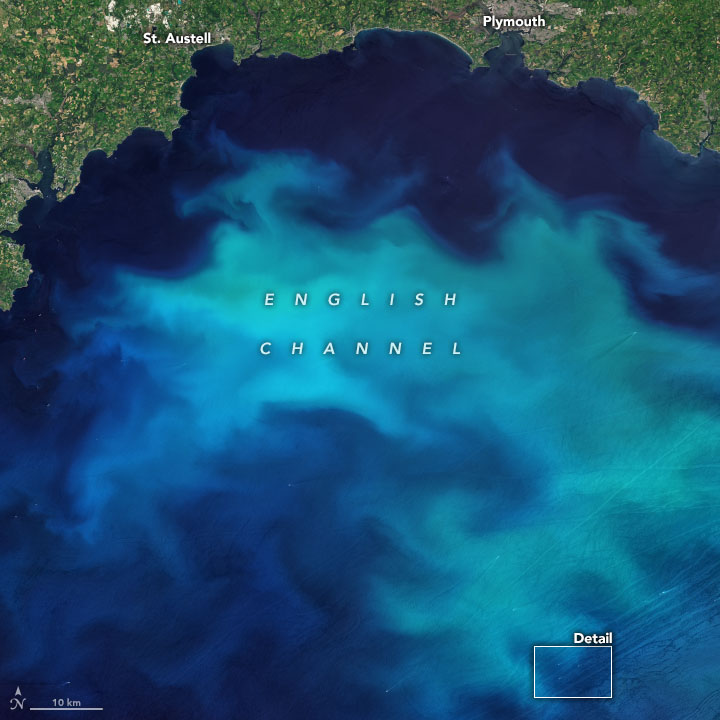 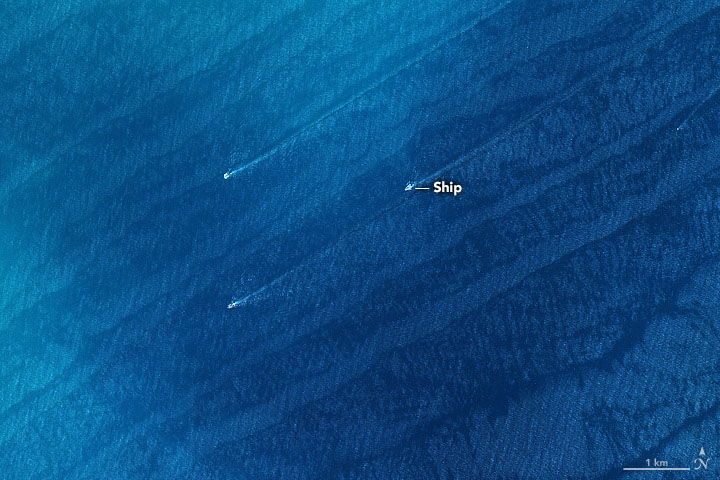 Spring and early summer 2020 brought unusually clear skies and persistent, unseasonable heat to northwestern Europe. Those conditions likely set the stage for large and persistent blooms of phytoplankton in the waters around the United Kingdom and Ireland.

Phytoplankton are tiny, plant-like organisms that often float near the ocean surface and turn sunlight and carbon dioxide into sugars and oxygen. In turn, they become food for the grazing zooplankton, shellfish, and finfish of the sea. The also play an important but not fully understood role in the global carbon cycle, taking carbon dioxide out of the atmosphere and sinking it to the bottom of the ocean.

On June 23, 2020, the Operational Land Imager (OLI) on Landsat 8 acquired natural-color imagery (above) of a massive phytoplankton bloom off the coast of southwestern England. The next day, the Moderate Resolution Imaging Spectroradiometer (MODIS) instrument on NASA’s Terra satellite observed the same bloom in a wider context (below), and phytoplankton are also visible in the North Sea.

The milky, light-colored waters are probably filled with coccolithophores, which have calcium carbonate plates that appear chalky white when amassed in great numbers. Greener waters may be rich with diatoms or suspended sediment. It is impossible to know for sure without taking direct water samples. The brightness of the color may reflect the density of the phytoplankton, while the various swirls and shapes trace the intricate movements of currents, eddies, and tides. 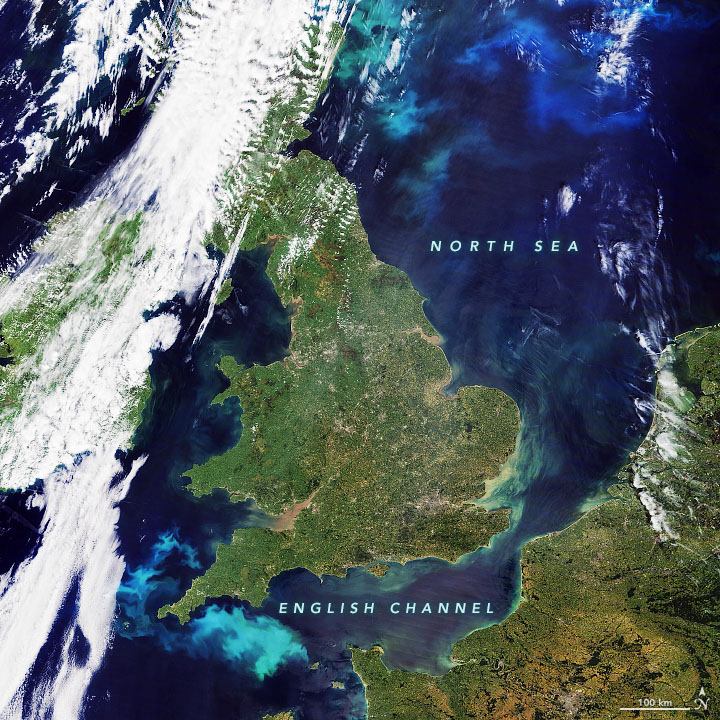 “In these latitudes, coccolithophores usually peak around the summer solstice, and they follow the spring diatom blooms,” said Barney Balch, a researcher at the Bigelow Laboratory for Ocean Sciences who studies phytoplankton. “They are probably of the species Emiliania huxleyi, common in those parts. Note that the nearby white cliffs of Dover contain massive amounts of coccoliths, deposited there over geological time.”

Phytoplankton are most abundant in the far North Atlantic and North Sea in late spring and early summer due to high levels of nutrients in the water. Melting snow and ice and spring rains bring increased runoff from rivers into the sea, bearing a heavy load of sediments and organic matter while also freshening the surface waters. Increasing sunlight through the season provides the fuel for growth.

“We regularly get coccolithophore blooms in the English Channel, but not usually so large and intense,” said Abigail McQuatters-Gollop, a marine biologist at Plymouth University (UK). “In May 2020, we had the sunniest month since records began. The weather was very warm, which likely caused stratification of the English Channel waters and triggered such an extraordinary bloom.“ Stratification is the layering of the ocean, such that waters of different temperatures, densities, and salinities mix less. Stratification can allow coccolithophores to remain near the sunny surface for longer periods of growth.

“Coccolithophores play a key role in carbon cycling in the marine environment, so it is important to monitor their abundance, which is likely to change with ocean warming and ocean acidification,” McQuatters-Gollop added. “Understanding why we get large blooms like this is critical to developing our understanding of the ocean’s role in climate change mitigation. Understanding how climate change and ocean acidification affect coccolithophores will also help us understand what future marine food webs might look like.”

In a recent study, McQuatters-Gollop and colleagues reported that the types and abundances of plankton species in the waters around the UK have changed significantly in the past six decades. The shifts are likely related to climate change—particularly warming temperatures—and could have long-term effects on the health and distribution of fish, marine mammals, and sea birds in regional waters.

Unusually clear skies and persistent, unseasonable heat may have set the stage for large and persistent blooms of phytoplankton in the waters around England.

The northern and western highlands of Scotland were still winter-brown and even dusted with snow in places, but the waters of the North Sea were blooming with phytoplankton on May 8, 2008, when the Moderate Resolution Imaging Spectroradiometer (MODIS) on NASA’s Aqua satellite passed over the region and captured this image. The tiny, plant-like organisms swirled in the waters off the country’s east coast, coloring the shallow coastal waters shades of bright blue and green.