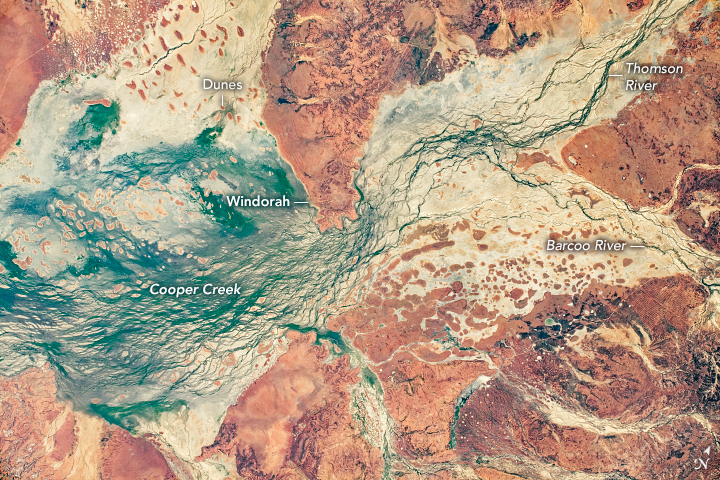 The Barcoo and Thomson rivers flow southwest and converge north of the town of Windorah to form Cooper Creek, a major river system that flows toward Lake Yamma Yamma and Lake Eyre (both outside this frame). The broad, gently sloping floodplain—more than 50 kilometers (30 miles) wide in some areas—allows for the development of a complex network of shallow channels carved by seasonal floods. The region provides significant habitat for water birds and has been classified by the Australian government as an Important Bird Area.

Ancient linear dunes, trending in an east-west direction, rise above the floodplain. Their Mars-like red color comes from traces of iron that coat larger quartz grains. Lnown as paleodunes, these features point to a drier past climate during their formation and migration. As the climate in this region has become slightly wetter (but still arid), vegetation density has increased, reducing the impact of wind and water on the dunes and halting most of their migration. There is some reshaping of sediment at the top of the dunes due to winds.

The combination of stable, ancient dunes and water channels displaying both braided and cross-connecting patterns make this region a planetary analogue for Mars. Studying the physical features of an arid land, whether from orbit or ground level, can prepare humans for exploration of worlds beyond our own.

Astronaut photograph ISS062-E-136862 was acquired on April 5, 2020, with a Nikon D5 digital camera using a 116 millimeter lens and is provided by the ISS Crew Earth Observations Facility and the Earth Science and Remote Sensing Unit, Johnson Space Center. The image was taken by a member of the Expedition 62 crew. The image has been cropped and enhanced to improve contrast, and lens artifacts have been removed. The International Space Station Program supports the laboratory as part of the ISS National Lab to help astronauts take pictures of Earth that will be of the greatest value to scientists and the public, and to make those images freely available on the Internet. Additional images taken by astronauts and cosmonauts can be viewed at the NASA/JSC Gateway to Astronaut Photography of Earth. Caption by Andrew Britton, Jacobs, JETS Contract at NASA-JSC.

The combination of stable, ancient dunes and water channels displaying both braided and cross-connecting patterns make this region a planetary analogue for Mars.

Flooding in the Australian Interior

Floods continued to spread across the interior of Australia in late January 2011, with high waters apparent in Queensland, New South Wales, and South Australia.