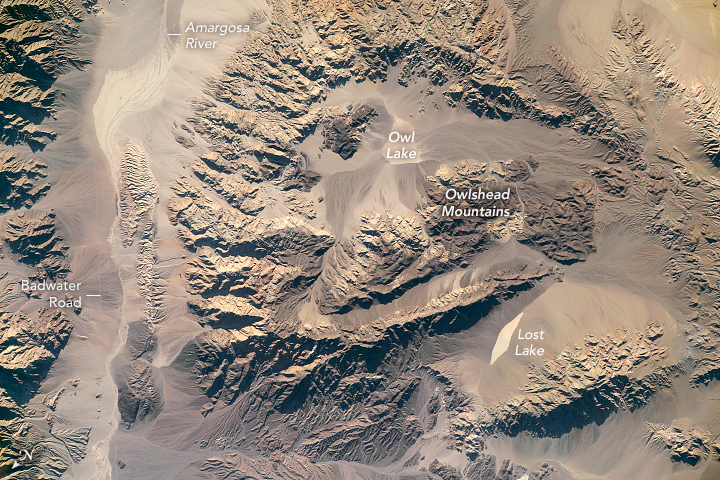 Even without knowing the location of the scene below, the lack of vegetation and standing water reveal this to be an arid place. Death Valley is known for its extreme dryness and dangerous heat records. However, traces on the land indicate that water sometimes flows here.

An astronaut onboard the International Space Station captured this view of the southern end of Death Valley National Park. High-resolution photography of bare landscapes can expose complex geology. Shadows accentuate the sharp angles and slot canyons of the Owlshead Mountains.

Surrounding those rocky textured outcrops, alluvial fans and dry lake beds appear as smoother landscapes. When rare rains do fall, sediment is carried from the mountains and deposited as alluvial fans in the valleys. Dry lakes—such as Lost and Owl—can appear at the junctions of multiple alluvial fans, where water accumulates and then quickly evaporates away.

Variations in rock colors and mountain shapes provide clues of previous seismic and volcanic activity here. The Owlshead Mountains are made of light-colored, older plutonic rocks and darker, younger volcanic rocks. The Amargosa River follows along a large fault zone leading to Badwater Basin, the lowest point in North America (north of this photo).

Badwater Road appears in faint traces cutting across the fan. Between the road and the Owlshead Mountains, smaller strike-slip faults create slot canyons where people can hike through the remote area.

Astronaut photograph ISS061-E-31529 was acquired on November 5, 2019, with a Nikon D5 digital camera using a 400 millimeter lens and is provided by the ISS Crew Earth Observations Facility and the Earth Science and Remote Sensing Unit, Johnson Space Center. The image was taken by a member of the Expedition 61 crew. The image has been cropped and enhanced to improve contrast, and lens artifacts have been removed. The International Space Station Program supports the laboratory as part of the ISS National Lab to help astronauts take pictures of Earth that will be of the greatest value to scientists and the public, and to make those images freely available on the Internet. Additional images taken by astronauts and cosmonauts can be viewed at the NASA/JSC Gateway to Astronaut Photography of Earth. Caption by Andrea Meado, Jacobs/JETS Contract at NASA-JSC.

The area is known for its extreme dryness and dangerous heat records. However, traces on the land indicate that water sometimes flows here. 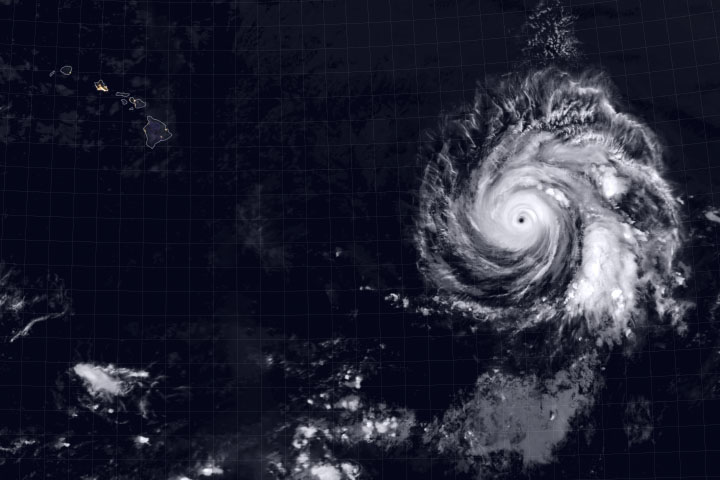 This pair of images from NASA’s Landsat 5 satellite documents the short history of Death Valley’s Lake Badwater: formed in February 2005 and long gone by February 2007.

At 86 meters (282 feet) below sea level, Death Valley, California, is one of the hottest, driest places on the planet.