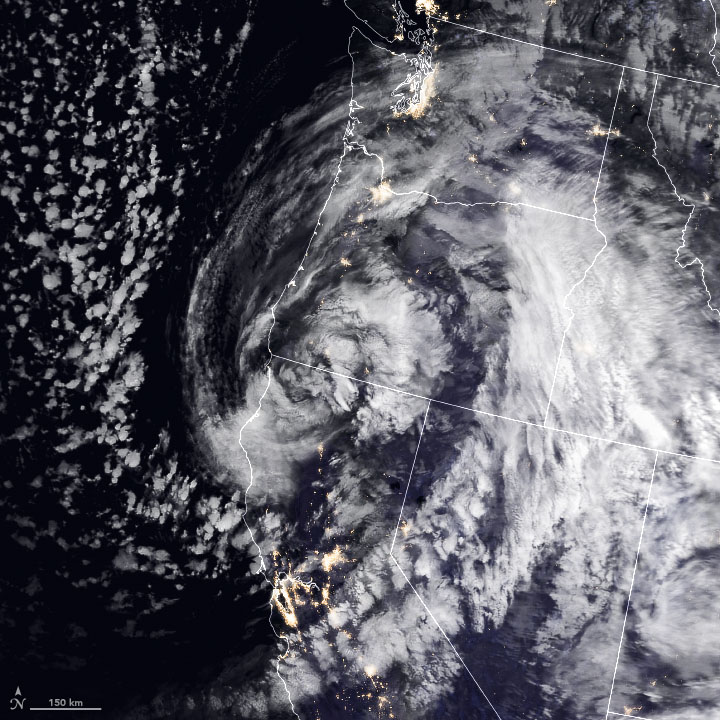 On November 26, 2019, a severe winter storm hit the Pacific Northwest, bringing flash floods, heavy snow, and hurricane-force winds. The storm—which the National Weather Service described as “unprecedented”—caused road closures and travel delays just as millions of people began traveling for the Thanksgiving holiday. The storm is expected to continue bringing blizzard conditions to the Sierra Nevada and scattered rain showers in the region.

The image above shows the storm as it approached the Oregon coast at 10:15 p.m. Pacific Time on November 26. The image is a composite of brightness temperature data acquired by the Moderate Resolution Imaging Spectroradiometer (MODIS) on NASA’s Terra satellite, overlaid on Black Marble nighttime satellite imagery.

Meteorologists labeled the storm a “bomb cyclone,” which occurs when the air pressure in a mid-latitude cyclone rapidly drops and winds intensify—a process called bombogenesis. On November 26, the storm reached the coast with a central pressure near 970 millibars (29 inHg), which is the lowest atmospheric pressure reading in California and Oregon this November. The storm brought wind gusts of 100 miles (160 kilometers) per hour.

The storm is one of two dropping heavy snow across the U.S. this week. On November 25-26, another storm hit the Great Plains region and Midwest. The snow was the heaviest in the Colorado Front Range, which received up to 40 inches (100 centimeters) outside of Fort Collins. Snow was expected to continue in the Upper Mississippi Valley and the Great Lakes on November 27.

The first major hurricane of the 2013 season in the eastern Pacific stalled near Mexico, drenching the western coast for several days.

A quick drop in atmospheric pressure produced an intense storm with hurricane-force winds.