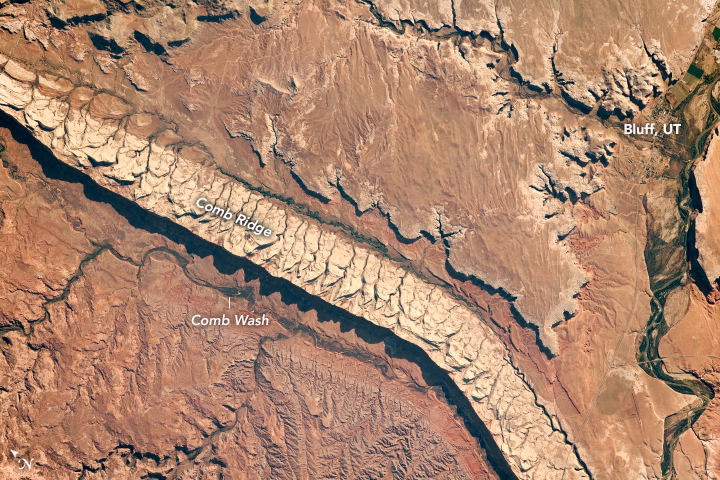 The deserts of Utah offer many textbook examples of geologic exposures. Accented by dramatic shadows, this photograph shows canyons and prominent topography around Comb Ridge, as observed by an astronaut aboard the International Space Station (ISS). The town of Bluff, Utah, is one of the few human footprints on this southwestern U.S. landscape.

Comb Ridge (Tséyíkáán in Navajo) is a large example of a geologic formation known as a monocline. This type of structure occurs when previously flat rock layers fold downward in one direction and then flatten out away from the bend. This escarpment trends in the north-south direction for almost 80 miles (130 kilometers) from Utah’s Abajo Mountains to Kayenta, Arizona. The Sun’s position at mid-morning (local time) caused the jagged edges of the ridge to cast shadows that accentuate topography and add depth to the photo.

A mountain-building event known as the Laramide orogeny lifted up this area between 40 and 70 million years ago. Subsequent rivers and streams associated with Comb Wash helped erode away the lifted layers of rock, creating a steep relief along the western edge of the sandstone cliffs. Sharp-crested ridges formed by tilted rock layers and differential erosion are sometimes referred to as “hogbacks” by geologists due to the spine-like appearance of the outcrop. The hogback of Comb Ridge is composed of Navajo Sandstone, which stands in vivid contrast to the darker surrounding rock formations.

Astronaut photograph ISS060-E-38053 was acquired on August 20, 2019, with a Nikon D5 digital camera using an 800 millimeter lens and is provided by the ISS Crew Earth Observations Facility and the Earth Science and Remote Sensing Unit, Johnson Space Center. The image was taken by a member of the Expedition 60 crew. The image has been cropped and enhanced to improve contrast, and lens artifacts have been removed. The International Space Station Program supports the laboratory as part of the ISS National Lab to help astronauts take pictures of Earth that will be of the greatest value to scientists and the public, and to make those images freely available on the Internet. Additional images taken by astronauts and cosmonauts can be viewed at the NASA/JSC Gateway to Astronaut Photography of Earth. Caption by Andrew Britton, Jacobs Technology, JETS Contract at NASA-JSC.

A mountain-building event lifted up this area between 40 and 70 million years ago.

This astronaut photo of Raven Ridge, Colorado, shows a long stretch of exposed rocks that mark the K-T Boundary, the time when dinosaurs went extinct.

Inverted river channels in central Utah look similar to features on Mars—a clue that liquid water once might have flowed in abundance on the Red Planet.