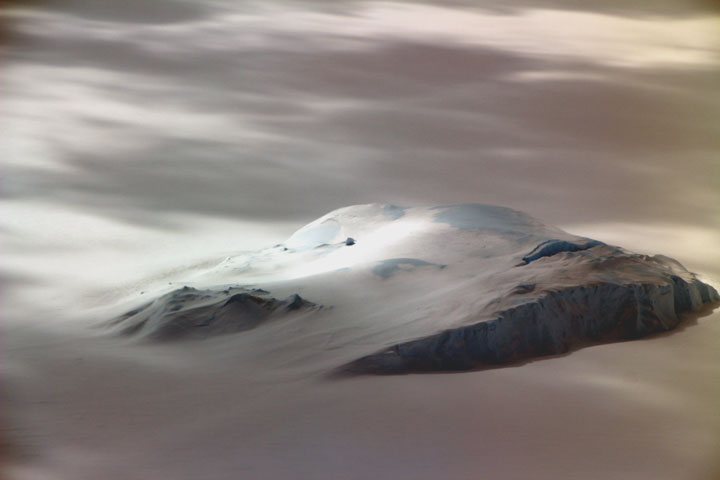 The waters around Antarctica are home to some enormous icebergs. But it wasn’t size that caught the eye of John Sonntag when he snapped this photo. Measuring just a few hundred meters across, the iceberg off East Antarctica is actually quite small relative to others in the area.

“The moody and rather spectacular lighting was what made me take the photo,” said Sonntag, a scientist at NASA’s Goddard Space Flight Center. “There was a thin, low stratus [cloud] deck at about 3,000 feet above the surface, but broken, which let direct light through at some points and not at others. It made that little berg really stand out.”

Sonntag shot the photo on November 18, 2019, during a research flight for Operation IceBridge—NASA’s comprehensive airborne survey of ice change. The flight originated in Hobart, Australia, and carried the science team across the Southern Ocean to survey ice in East Antarctica’s Wilkes Land district. The plane passed over Porpoise Bay, where sea ice had a firm grip on the iceberg.

The incredibly smooth surface of the sea ice indicates that it is topped with ample snow—possibly as much as tens of meters—which also drifted onto the berg’s left side. “That gives the little berg an almost ghostly aspect,” Sonntag said, “just emerging from the bay as if it had been born there, which in a sense it was.”

Many of Porpoise Bay’s bergs are born when ice calves from glaciers fringing the embayment. Calving is a normal part of life for glaciers that extend their icy tongues over water; it does not directly contribute to sea level rise because the ice is already floating when it breaks off.

Scientists are interested, however, in glaciers in East Antarctica that appear to be speeding up and losing ice—land ice that when lost, does have implications for sea level rise. Losses from this part of the continent are small compared to those in West Antarctica, but recent changes have scientists looking more closely.

From October to November 2019, IceBridge flights were based out of Hobart for the first time in ten years of the mission. The city’s proximity to East Antarctica allowed the team to make twenty science flights to the region, which hasn’t been studied as much as Antarctica’s western side and peninsula.

The campaign was the last polar mission for IceBridge, which has flown from bases out of Alaska, Greenland, Chile, Antarctica, and now Australia. The airborne mission was designed to bridge the gap between NASA’s Ice, Cloud, and Land Elevation Satellite (ICESat) missions; ICESat stopped collecting data in 2009, and ICESat-2 launched in September 2018.

“IceBridge has been a major success. Hundreds and hundreds of scientific papers—condensed knowledge and insight about our home planet—have come out of Operation IceBridge,” said Sonntag, who has worked with the mission since its inception. “That happened because Operation IceBridge worked effectively across many NASA centers, across numerous government agencies, and with our many international partners. That took hard work, but it also took goodwill. People want to help us, to be a part of it. For goodness sake, let’s never lose that. It’s incredibly powerful.”

Hundreds of scientific papers have come out of NASA’s Operation IceBridge, which ended this week.

Glory on the Brunt Ice Shelf

One of NASA’s workhorse planes, the DC-8, is being used this month to provide critical insight on the health of the ice sheets and shelves at the southern tip of the world.

More Glaciers in East Antarctica Are Waking Up

Satellites detect changes in the height and velocity of ice in an area that was thought to be relatively stable and quiet.

A Neat Slice of Ice in Antarctica