Seasonal Fires are Burning in Angola 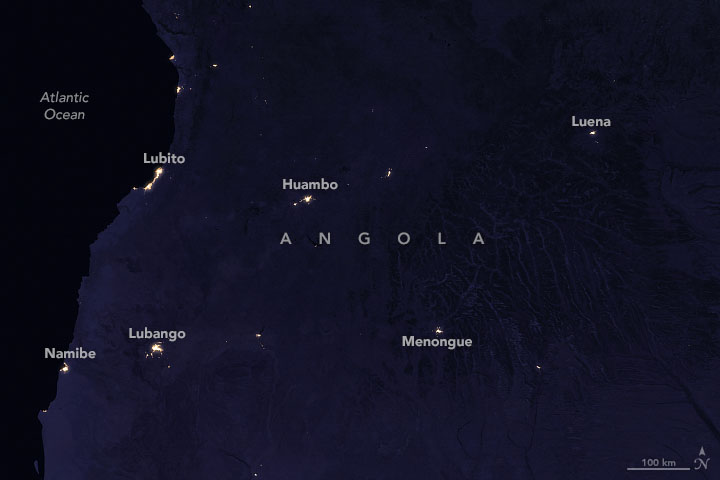 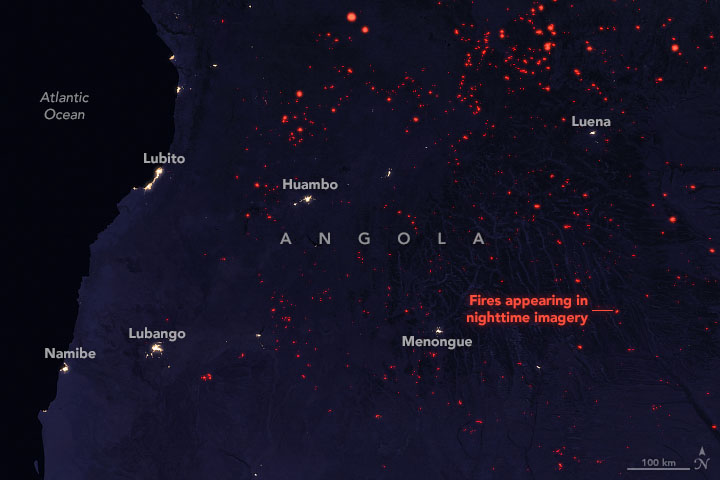 Several areas of the world have been experiencing more dramatic fire seasons in 2019 than usual. Intense wildfires have lingered near the Arctic for much of this summer, spewing large amounts of smoke and aerosols into the atmosphere. In August, the Brazilian Amazon experienced its most active fire season since 2010. But in some regions, fire season is right on par with past years.

The right image above shows fire detections over Angola on August 22, 2019, as observed with the “day-night band” of the Visible Infrared Imaging Radiometer Suite (VIIRS) on Suomi NPP. The image was overlaid on data from the Black Marble (left image). VIIRS detects light in a range of wavelengths from green to near-infrared and uses filtering techniques to observe signals such as city lights, auroras, and wildfires.

For wildfires, VIIRS measures the infrared radiation (heat released) from points on Earth’s surface. The data are processed through an algorithm, which determines if the information in a pixel can be attributed to a fire. On the map, fires appear in red, while white lights are from cities and towns.

The fire signals were plentiful on August 22, making Angola appear to have more fires than anywhere else in the world at the time, as some news reports pointed out. However, to gauge the intensity of fires, researchers examine the fire radiative power; specifically, the energy released in megawatts.

“The low values of fire radiative power in Angola indicate that these are mostly smaller agricultural fires, as opposed to large forest fires,” said Charles Ichoku, a climate and fire researcher at Howard University and a former NASA Earth Scientist. Typically, savannas, grasslands, and croplands are burned in southern Africa at this time of year for various agricultural reasons, including clearing the land for new crops.

August is also usually the peak of burning season in southern Africa. According to NASA’s Fire Energetics and Emissions Research, the fires in Angola are not unusual so far. Ichoku said, “Therefore, it is not unusual to detect so many hotspots from satellite this time of year in Angola and neighboring countries.”

Fire season peaks every August in some parts of southern Africa.