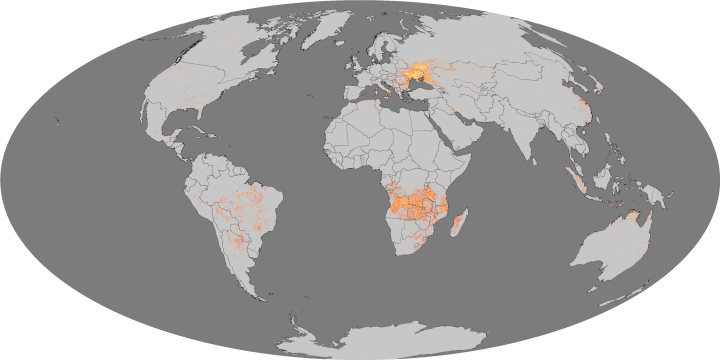 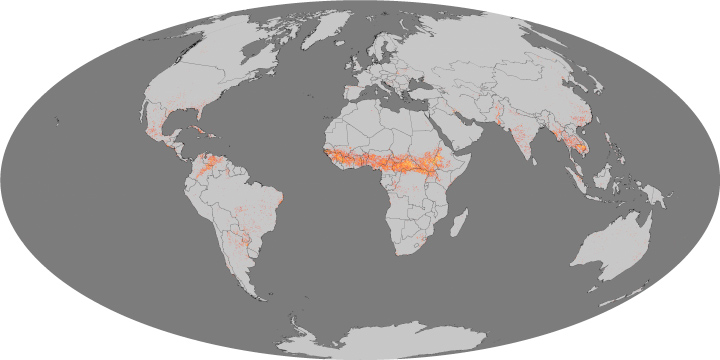 Fire is ubiquitous, both a tool and a destructive force. Across the world, fire is used to stimulate growth in pasture grassland or clear ground for agriculture. It is an essential part of many ecosystems, which rely on fire to clear away dead plant matter and return nutrients to the soil. On the other hand, fire can spread easily out of control, threatening fragile ecosystems and human life and property.

Like plants, fire activity grows and wanes in seasonal patterns. Globally, fires peak in July, August, and September, when summer’s drying heat makes vegetation flammable and lightning ignites the landscape. In addition, summer is the time when many crops are harvested and fields are burned in the Northern Hemisphere, where most of Earth’s continents are. On any given day in July, August, or September an estimated 6,000 fires burn across the world. February is the slowest month of the year, with an estimated 3,000 fires per day. To watch fires move across the globe throughout the year, see Fire in the Global Maps section of the Earth Observatory.

The contrast between the two months is shown in this pair of images made from data collected by the Moderate Resolution Imaging Spectroradiometer (MODIS) on NASA’s Terra satellite. The top image shows all of the fires detected during August 2008, while the lower image shows February 2008. Dense fire concentrations are yellow, while more scattered fires are red. February is clearly the burning season in the tropics. A solid band of red stretches across the Sahel of Africa, and hundreds fires were burning in northern South America, Central America, and southeast Asia. In August, the fire regions shifted into more temperate regions north and south of the Equator. Intense agricultural fires burn in south-central Europe and in southern Africa.

Satellite-based fire monitoring helps land managers in remote regions decide how to allocate expensive equipment like airplanes typically used to detect fires. "Most fires are noticed by people, but often in protected areas, there are relatively few people," says Diane Davies, the principal investigator of the Fire Information for Resource Management System (FIRMS) at the University of Maryland. In remote protected areas, a fire can go unnoticed until it is large and expensive to control. To give land managers warning that a fire is burning on or near protected land, Davies developed FIRMS, which automatically sends an email or text message alert to land managers whenever MODIS detects a fire in the region.

Building a Long-Term Record of Fire

Scientists have answered some important questions about how fires vary around the world and are changing over time.