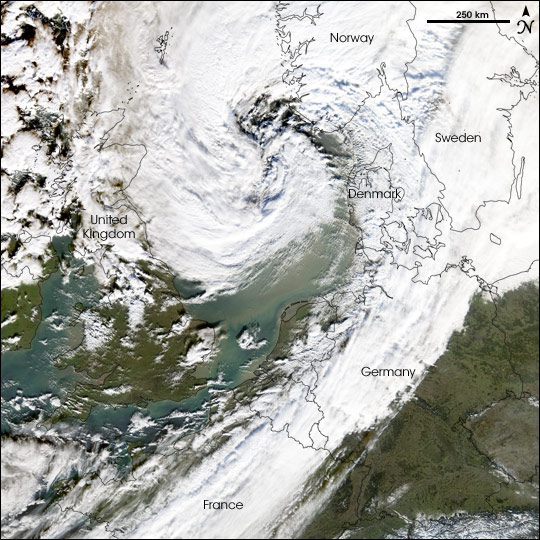 The clouds over Northern Europe have the menacing curl of a low pressure system associated with severe winter storms. This particular storm lashed the United Kingdom, Scandinavia, northern Germany, and Russia with hurricane-force winds and intense rains. According to news reports, 14 people died in the storm, many from being hit by falling trees or blowing debris. The storm brought severe floods to northern England and Scotland, submersing the English town of Carlisle entirely. Across Northern Europe, train services were halted and electricity flickered out under the onslaught of winds that gusted up to 180 kilometers per hour (112 mph). This image of the storm was acquired by the Moderate Resolution Imaging Spectroradiometer (MODIS) on NASA’s Terra satellite on January 9, 2005.

Although it arrived several weeks shy of the official start of the hurricane season, Subtropical Storm Andrea became the first named storm of the 2007 Atlantic hurricane season. By May 9, the storm’s winds reached 75 kilometers per hour (45 miles per hour).