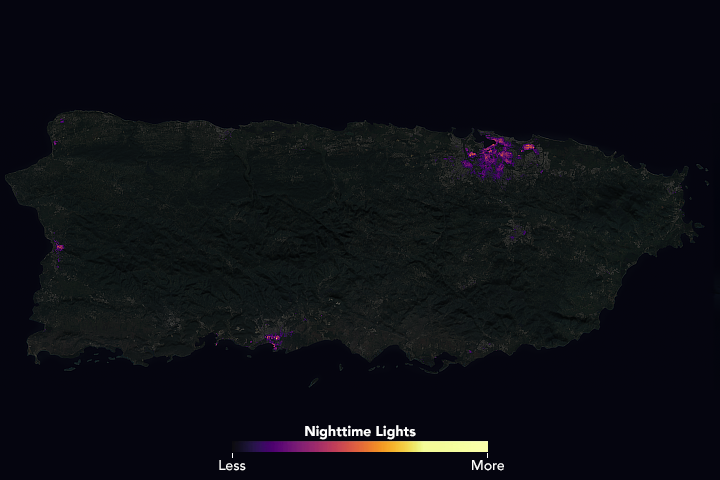 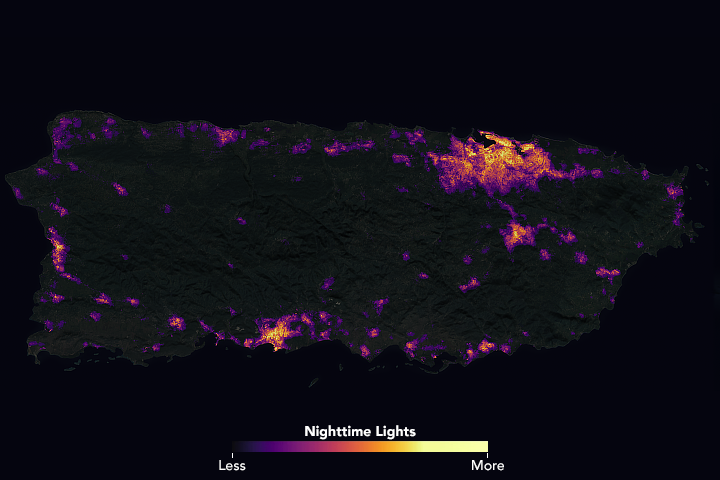 When category 4 Hurricane Maria lashed Puerto Rico in September 2017, it destroyed thousands of homes and businesses, flooded towns, killed nearly 3,000 people, and caused the longest electric power blackout in U.S. history. Maria was responsible for at least $90 billion in damages and the island’s economy lost 15 percent of its gross national product. It also lost at least 200,000 people to migration.

Those losses, human and financial, can be partly attributed to the blackout, the effects of which will be felt for years. Satellite observations and analyses by NASA scientists now offer a way to track those effects over time. In the case of Maria, the effects disproportionately affected remote and vulnerable communities.

In the months following the storm, scientist Miguel Román led a team of NASA researchers in developing neighborhood-scale maps of lighting across Puerto Rico. They started with data acquired nightly by the Visible Infrared Imaging Radiometer Suite (VIIRS) on the Suomi NPP satellite. VIIRS has a “day-night band,” which detects light in a range of wavelengths from green to near-infrared, including reflected moonlight, airglow, lightning, auroras, wildfires, and light from human activity (including city lights). The team then combined that night light data with Landsat and OpenStreetMap data to monitor where and when electric power was restored. They also analyzed the demographics and physical attributes of neighborhoods affected by the power outages.

The image pair above shows the extent of electric lighting across Puerto Rico through November 2017 (left) and March 2018 (right), two and six months after the storm. The composite map below shows the number of days that any given area went without power. Greens and yellows represent fewer days (0 to 60), and reds and pinks had more days in the dark (120 to 180). 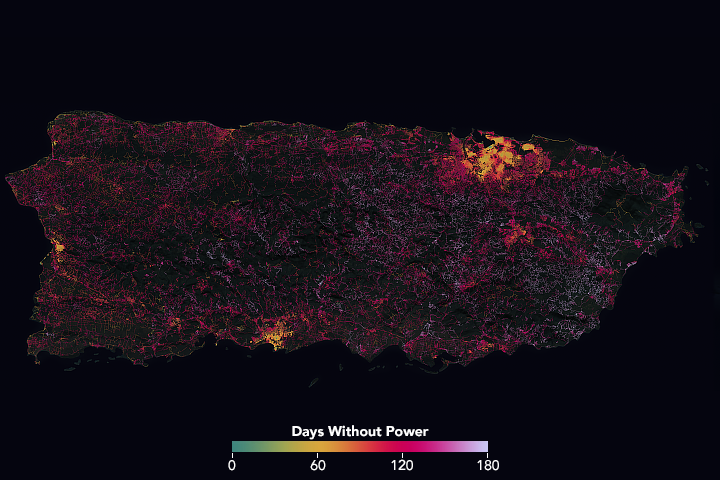 A disproportionate share of the long-duration power failures occurred in rural communities. The analysis by Román and colleagues found that 41 percent of Puerto Rico’s rural municipalities experienced prolonged periods of outage, compared to 29 percent of urban areas. In the six months after Hurricane Maria, Puerto Ricans lost an estimated 3.9 billion hours of access to electric power, and rural communities accounted for 61 percent of that loss. In the mountainous interior of the island , some residents went without power for more than 120 days. However, even some heavily populated areas had variable recovery rates between neighborhoods, with suburbs often lagging behind urban centers.

“It’s not just the electricity being lost,” Román said. “Storm damage to roads, high-voltage power lines, and bridges resulted in cascading failures across multiple sectors, making many areas inaccessible to recovery efforts. Some people lost access to other basic services like running water, sanitation, and food for extended time periods.”

The difference between urban and rural recovery rates is partly due to the centralized set-up of Puerto Rico’s energy grid, which directs power to prioritized locations rather than based on proximity to the nearest power plant, Román noted. Areas were prioritized, in part, based on their population densities, which puts rural areas at a disadvantage. Within cities, detached houses and low-density suburban areas also went longer without power.

The absence of electricity, as seen in the night lights data, offers a new way to visualize storm impacts. It is a visible indicator from space that critical infrastructure beyond power may be damaged, including access to fuel and other necessary supplies. In the study, researchers noted that the communities with long-duration power outages correspond with areas that reported reduced access to medical resources.