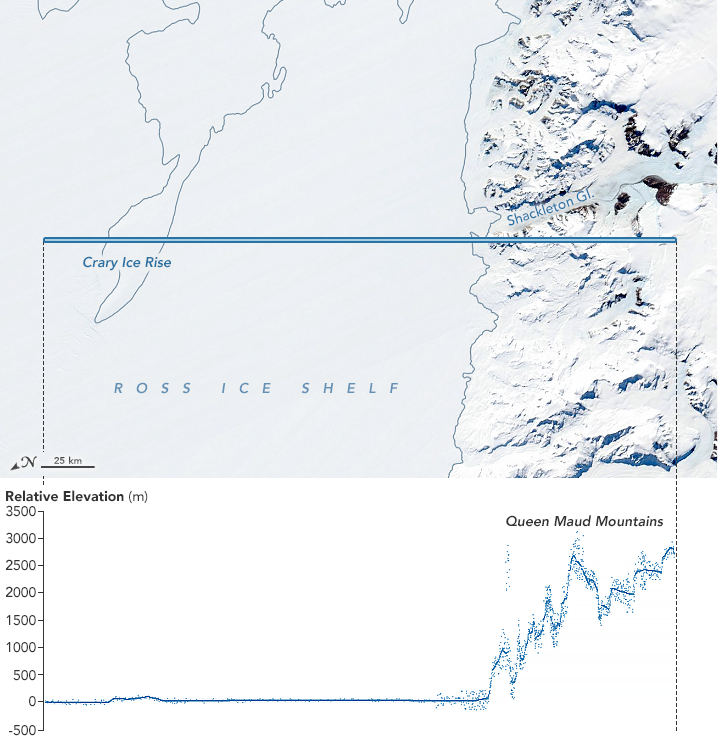 NASA’s Ice, Cloud and land Elevation Satellite-2 (ICESat-2) was launched in September 2018 and became the highest-resolution laser altimeter ever operated from space. The satellite is now measuring the height of Earth’s surfaces in remarkable detail. In this series, NASA Earth Observatory is sharing three early views that highlight the breadth of what ICESat-2 can “see.”

As scientists examined the first elevation data from the new ICESat-2 satellite, they saw vast, smooth stretches across Antarctica. Indeed, most of the continent’s snow- and ice-topped surface is flat. So too are the parts of an ice sheet that spread over the water, such as the Ross Ice Shelf. But there are some places where the terrain rises and falls steeply, such as the Transantarctic Mountains dividing East and West Antarctica.

The rugged terrain of the Queen Maud Mountains—a subdivision of the Transantarctic Mountains—is visible in the elevation measurement above, acquired on October 26, 2018, by ICESat-2’s Advanced Topographic Laser Altimeter System (ATLAS). For reference, the orbital path is laid over a natural-color image acquired on November 23, 2018, by the Moderate Resolution Imaging Spectroradiometer (MODIS) on NASA’s Terra satellite.

The ATLAS instrument measures elevation by sending pulses of light to Earth’s surface. It then measures, to within a billionth of a second, how long it takes individual photons to return to the satellite. Each dot on the visualization above represents a photon detected by ATLAS. Some of the dots in this “photon cloud” are photons from the Sun that reflected from the snow, but the densest areas form a line that indicate the height of a surface.

“ICESat-2 can track the surface nicely over some difficult terrain. It can resolve small valleys in the mountains that are really hard to see in other altimetry data,” said Benjamin Smith, a glaciologist at the University of Washington. Some of these mountain slopes are very steep, with angles of more than 45 degrees. “Think about trying to stand up on something like that. It’s a pretty severe slope.”

Not only is ICESat-2 showing more detail than previous space-based altimeters, it is also filling in existing gaps in coverage. Orbiting over more southern latitudes than ever before, the satellite can start to show changes closer to Antarctica’s center, where there are still large unknowns in how the ice is changing. Scientists think the changes are small, but the Antarctic Plateau is so vast that even very small changes to the height of the ice can lead to large changes in sea level. 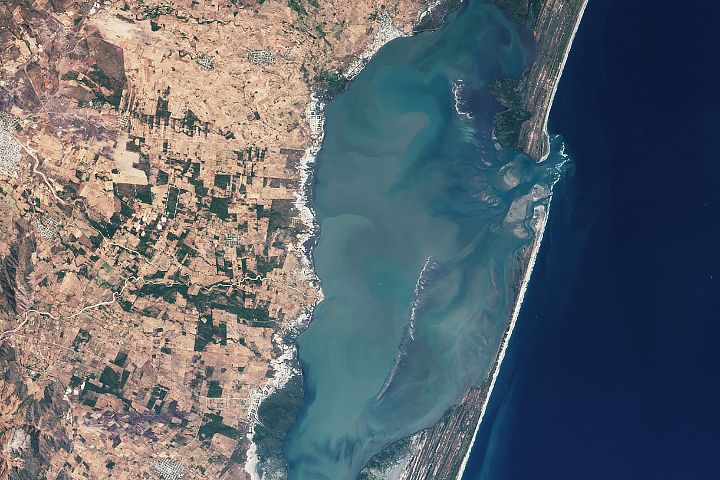 Throughout Antarctica, broad ribbons of ice known as ice streams shed large quantities of ice into the ocean.