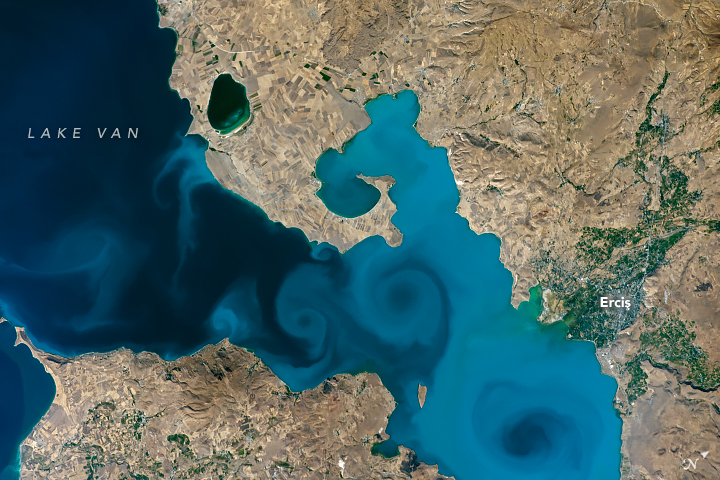 While orbiting on the International Space Station, astronaut Kate Rubins shot this photograph of part of Lake Van in Turkey, the largest soda or alkaline lake on Earth. Generally, soda lakes are distinguished by high concentrations of carbonate species. Lake Van is an endorheic lake—it has no outlet, so its water disappears by evaporation—with a pH of 10 and high salinity levels.

Waters near the city of Erciş (population 90,000) are shallow, but other parts of the lake can be up to 450 meters (1,467 feet) deep. Lake Van water levels have changed by 100s of meters over the past 600,000 years due to climate change, volcanic eruptions, and tectonic activity.

Turbidity plumes, which appear as swirls of light- and dark-toned water, are mostly comprised of calcium carbonate, detrital materials, and some organic matter. High particle fluxes occur in Lake Van during spring and fall, when phytoplankton and aquatic plants grow and produce a lot of organic carbon. The lake also hosts the largest known modern microbialite deposits.

Astronaut photograph ISS049-E-3464 was acquired on September 12, 2016, with a Nikon D4 digital camera using a 290 millimeter lens and is provided by the ISS Crew Earth Observations Facility and the Earth Science and Remote Sensing Unit, Johnson Space Center. The image was taken by a member of the Expedition 49 crew. The image has been cropped and enhanced to improve contrast, and lens artifacts have been removed. The International Space Station Program supports the laboratory as part of the ISS National Lab to help astronauts take pictures of Earth that will be of the greatest value to scientists and the public, and to make those images freely available on the Internet. Additional images taken by astronauts and cosmonauts can be viewed at the NASA/JSC Gateway to Astronaut Photography of Earth. Caption by Andrea Meado, Jacobs Technology, JETS Contract at NASA-JSC.

Rich in carbonate species and salts, the basin is the largest alkaline lake in the world.

The 12,000-year old town of Hasankeyf could soon be underwater due to the construction of a new dam.

In southeastern Turkey, glaciers slide down bowl-shaped valleys amidst a shadowy landscape of cirques and arêtes.