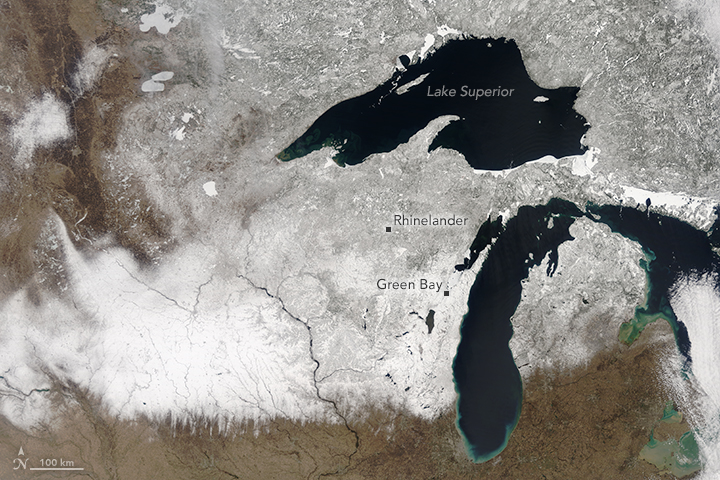 An unusually late spring snowstorm pummeled the U.S. Midwest with snow. Green Bay, Wisconsin, experienced the largest April snowstorm on record, with more than 50 centimeters (20 inches) of snow falling over April 13–16. The National Weather Service called it a “once in a lifetime” event. The storm closed roads and businesses for several days, caused sporadic power outages, and produced waves up to almost 5 meters (16 feet) high on Lake Michigan.

The Moderate Resolution Imaging Spectroradiometer (MODIS) on NASA’s Terra satellite acquired this image at 11:50 Central Daylight Time (16:50 UTC) on April 19, 2018. Temperatures rose quickly after the storm cleared, and large amounts of the snow melted from morning to the afternoon. Forecasters anticipate standing water and minor flooding in northeastern and central Wisconsin as the snow melts.

An April storm dropped record amounts of snow in some Midwest cities.

Spring Snow in the Upper Midwest 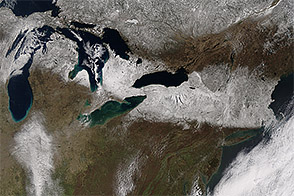 A spring storm dumped several inches of snow across the Upper Midwest and Northeast.

Acquired May 2 and April 27, 2013, these images document a dramatic change in Colorado thanks to a late-spring snowstorm.