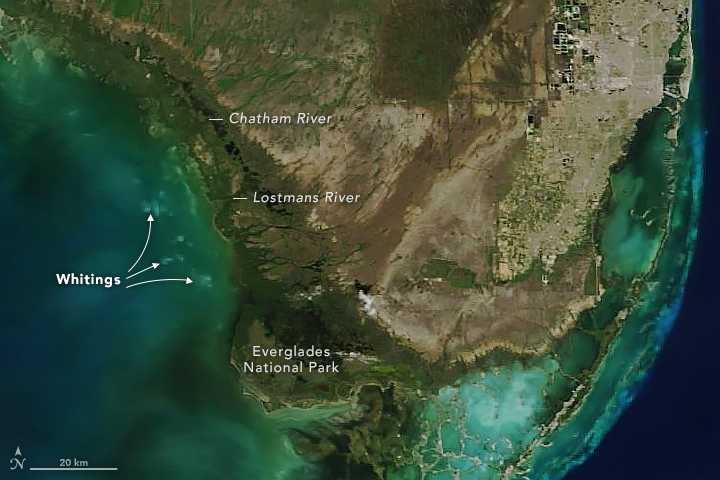 In October 2013, U.S. Geological Survey scientist Lisa Robbins photographed blotchy patches of light blue water along Florida’s southwest coast during an aerial survey. Though phytoplankton blooms and sediment churned up by winds sometimes cloud the shallow waters in this area, this seemed to be something different. The edges of the feature were sharp, and the turquoise shade of the water was unusual.

What Robbins had photographed was a whiting event, a discoloring of the water due to particles of calcium carbonate suspended in the water. The phenomenon happens in both oceans and lakes, though the edges of whiting events tend to be sharper in the ocean.

The image above, acquired by the Moderate Resolution Imaging Spectroradiometer (MODIS) on NASA’s Terra satellite on April 3, 2012, shows a whiting event about 10 to 20 kilometers (6 to 12 miles) off the Gulf Coast of Florida. The bright spots—whitings—are surrounded by darker blue water near the Chatham and Lostmans rivers. This region’s mostly undeveloped coastline is dominated by mangrove islands, tidal marshes, and sea-grass beds.

Whiting events occur widely, and researchers have investigated events near the Bahamas, the Great Lakes, the Persian Gulf, Lake Kivu in central Africa, and Green Lake in Fayetteville, New York. However, this was the first instance that researchers reported a whiting event in Southwest Florida. Little was known about their frequency, how widespread they were, and what caused them.

When Jacqueline Long, a graduate student at University of South Florida, heard about the whiting event from her advisor, Chuanmin Hu, she set out to change that. As part of her thesis, she analyzed daily satellite data collected by MODIS to construct a record of whiting events in Southwest Florida between 2003 and 2015.

It quickly became clear that this was just one of many days when whitings were present. Of the 4,748 days analyzed, whitings were visible in MODIS images on 656 days. They were most common in the spring and fall, with whiting coverage peaking in 2011 and 2012, after relatively few events between 2003 and 2008. Most whiting events—88 percent—occurred within 40 kilometers (25 miles) of the coastline, though whitings clustered especially close to the coastline in years when they were widespread.

Tallying the number and extent of whiting events was the easy part. Sorting out why they occurred proved more difficult, and it remains somewhat of a mystery. In studies of events in other areas, scientists have theorized that whitings could be related to changes in water temperature, the presence of certain types of phytoplankton blooms and other microscopic life, and the resuspension of carbonate mud by winds or even by large schools of fish.

For the events in Southwest Florida, Long checked meteorological records for patterns in sea surface temperature, wind speed, precipitation, and river discharge to see if they appeared related. She did not find clear connections, but water sampling of whitings did show elevated levels of a particular family of diatom called Thalassiosira. “It is possible that these diatoms play a key role in triggering whiting events because they can function as nucleation points or ‘seeds’ where calcium carbonate crystals grow, but more research is needed to prove this,” said Long.

Researchers analyzed more than a decade of satellite imagery to better understand why patches of light-colored water emerge along Florida’s Gulf Coast. 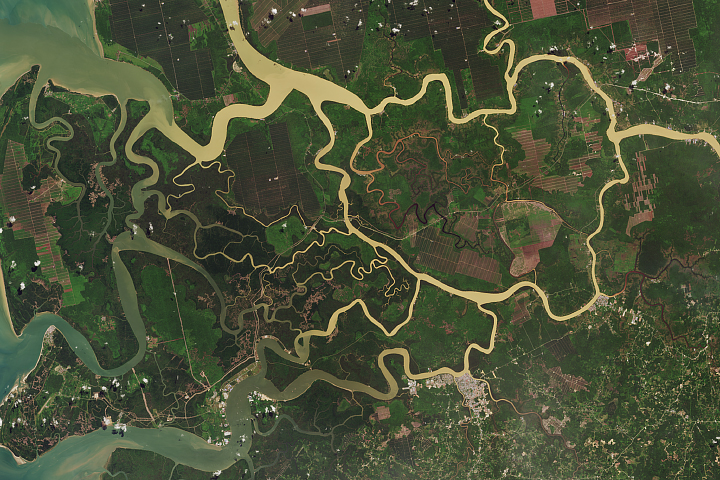 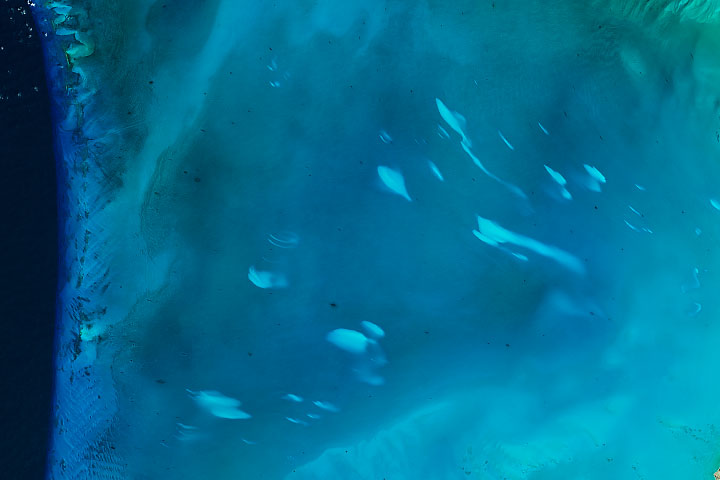 Researchers used satellite imagery to reveal where and when the discolored patches of water appeared between 2003 and 2020 and found a puzzling temporary increase in events in some areas.

Black Water off the Gulf Coast of Florida

Black Water off the Gulf Coast of Florida